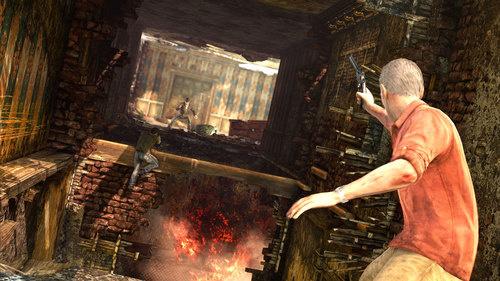 Which one do I hit again?

It may come as a shock to some that the name Jimmy Fallon is not well known in Europe.  In fact, I probably know him more than most due to his role in a bizarre remake of the French film Taxi.  Gone is the gritty Parisian based comedy, replaced with Queen Latifah.

If Fallon's crimes against cinema were not enough, he also has a large head that filled the screen during the recent Uncharted 3 gameplay footage shown on his TV show.  The in game demonstration shows a level where Nathan Drake and his aged ally Sully work together to traverse a burning building.  It appears that the AI is controlling Sully like in previous games, but could a co-op partner be involved instead?

For those Co-Optimus members who prefer to see footage without having to shout 'Heed!' at the screen click Read More.  There are also some newly released images courtesy of Kotaku.