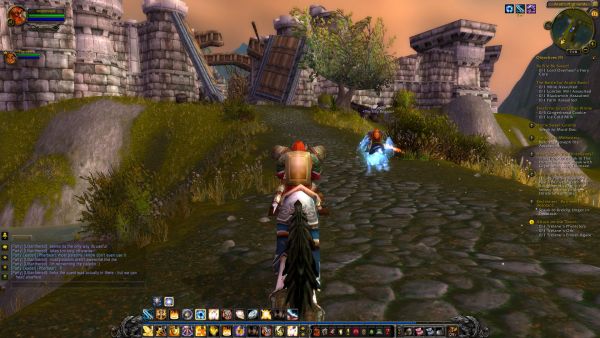 This Week in Co-Op, Mike and Nick head to the land of Azeroth where they play World of Warcraft and the latest expansion pack - Cataclysm.  This is Nick's foray in WoW, while Mike is a 6 year veteran.

There was a time I had sworn off all MMOs. The last two I played, City of Heroes and Asheron’s Call 2, sucked the life out of all my other gaming - so much so that its been a good five years since I touched the genre. But a cataclysmic event occurred, and by that I mean an Amazon sale putting World of Warcaft at $5 combined with the launch of the most drastic expansion for the game in Cataclysm. It didn’t help that there was a little Night Elf on my shoulder telling me to do it, to come in where the fire is warm and everyone knows your avatar’s name. That night elf was Mike, and he was my WoW tour guide.

In actuality we decided to create two brand new characters for our WoW experience - we decided to be a clan of Dwarves; small, powerful, and dead sexy. Inspired by a Warcraft 3 figure on my desk I created a Holy Knight (Erm, Paladin. - Mike), Mike chose a Voodoo Guy (/facepalm Shaman - Mike). I chose everything about my character very carefully, every feature was exactly to my liking. I was ready to adventure - and it was time to pick a name. Go random generator! Ultan it said. A fine name I thought, but my character is more distinguished than that - I am Ultan The Red. I clicked go...and suddenly Ultanthered was born. Wait...what? I quickly found Pherbear within the world and soon we were off on our quest. Would we save some damsel in distress? Perhaps hunting some Orcs? Defending the lands of Azeroth from impending doom? No...our quest was simply to kill 10 rats (10 Troggs, but you know... rats. - Mike). Well kill 10 somethings - they may as well have been rats. Apparently there’s a real big problem in the world where creatures just spawn at a rate faster than two rabbits on spring break can put out. So everyone and their brother needs you to kill sets of 10 creatures as fast as possible. With a good co-op buddy at my side, our workload was cut in half, and in no time flat we were leveling our characters up with maximum pleasure.

A new skill here, some new weapons there, a piece of armor for my feet, and an achievement for that quest. I’m pretty sure I had a lot to do with it, but...we were earning lots of stuff. (Nick had a lot to do with “it” alright. “It” being running off unsupervised. -Mike) The loot, the dings, the bells and the whistles flew at us. It’s amazing how well paced the positive reinforcement is in World of Warcraft - gently prodding you for the next goodie you simply must obtain.

Over the next couple of nights I signed onto World of Warcraft and Pherbear showed me the ropes. He told me about Blocking (Tanking. Seriously Nick, do you even listen? -Mike) - a skill where you take a lot of damage because you are awesome. He told me how to create my Skill trees, he described mystical Dungeons where the rewards were even greater. And while we simply hopped from quest to quest, collecting our shiny gizmos (This is correct. -Mike), I really didn’t have a clue what it was all about. We didn’t die, it was easy, and it almost felt unfair - but I didn’t care - despite the slaughter of thousands of creatures I was getting the treats I needed. My character was making a name for himself - and soon - I hit level 20.

Then came the night of our first Dungeon run.... If World of Warcraft is a rollercoaster, the world outside the dungeons is that slow climb up the hill. The dungeons on the other hand are your downward spiral, your loop da loops, and your corkscrews all at once. All I know is its a good thing Mike knows how to cast a healing spell, because I’m pretty sure I would have died 9 times over.  (I told you that slamming the keyboard uncontrollably isn't a viable strategy.  -Mike)

After it was all over and we were victorious - I simply stood in the dungeon admiring the bodies that lay around me. It was a total adrenaline rush and the rewards were as good as I hoped...

I was hooked and it wasn’t long until I hit level 30. Now I sit and wait the next big thing - I fear what rollercoaster may lay ahead - it’s a good thing I’ve been killing all these big dough boys in preparation.  (Those are Ogres Nick...Ogres damn it! -Mike)

If you'd like to join our guild we are The Billy Brigade on Alleria!