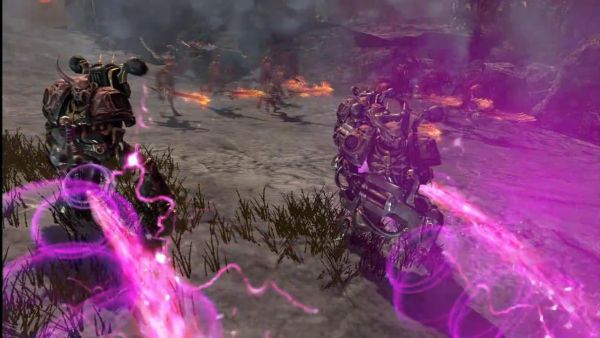 It’s time now for some new Dawn of War 2: Retribution info that should get the mouth watering for most of us, once again. First on the agenda is a great collectors edition of Retribution, complete with all six races bonus wargear, poster, and race cards in a nice bundle. If you’re just not into that sort of thing and you’re especially in love with a particular race, you’ll be able to buy the individual race edition of Retribution at the normal retail price.

Fans of a specific race can pledge their allegiance by pre-ordering one of the six available specific race packs for the same $29.99 suggested retail price as the regular version of Warhammer 40,000: Dawn of War II - Retribution. These race packs are available for electronic distribution and are ONLY available at pre-order stage. Each race pack includes four unique ability and Wargear items that can be used to enhance the single player campaign.

If you want to get your hands on any race, you’d better get on it now. If you want a particular one digitally you’ll have to keep an eye out for the retailer that sells that edition.

The Ork Race Pack is exclusive through STEAM and the Tyranid Race Pack exclusive through THQ.com. The Space Marine, Chaos Space Marine, Eldar and newly announced Imperial Guard race packs are also available for pre-order through THQ.com, STEAM and other electronic distribution partners. After launch, gamers will have the option of purchasing the individual race packs digitally through STEAM for a nominal fee.

Otherwise you can check your local retailer for the $39.99 collectors edition, or $29.99 race packs for the Dawn of War 2 - Retribution pack of your choice. You have until March 1st to make up your mind for those in North America. Did we mention the game comes with the full co-op expected from the Dawn of War franchise? Hopefully this is enough notice to avoid that nominal fee through Steam to pick up the packs later on.