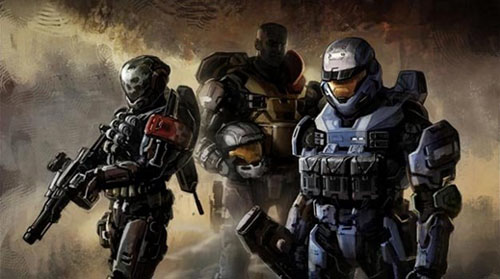 This week, Sam and Tally play some Halo: Reach, co-op-linking New York to Britain. Lag ensues, witticisms are made, Spartan logos are poked fun at, and (of course) much dying occurs.

SAM: On booting up Halo: Reach for the first time I was given the option of designing my Spartan.  With a wealth of options, most of which I could not afford due to a lack of in game currency, I decided to create my character in keeping with my own values.  Therefore, my number 6 (or Jimbo as I like to call him) wears a startling yellow suite adorned with his own stylish symbol – a nice cup of English breakfast tea.  What better way to disarm the Covenant, than with a promise of a hot brew and a deadly machine gun?

If Jimbo reflected my sunny outlook on life, what was I in for when playing alongside Tally for the first time?  It seemed that her Spartan also reflected her personality, resplendent as it was in pastel shades.  Tally certainly looked every part the hardened Halo warrior, but what is that symbol she has created?  A cat!  An ickle cat face with fetching bowtie adorned her battle scarred suit.  This was no Puma or Lion, but your bog standard household moggy.  Between the two of us we attacked the enemy with a combination of hot beverages and pets – an unlikely combination to defeat an alien invasion.

Therefore, we needed one more person to join us in our quest.  Someone we could continuously spawn off should we fall in battle.  We shall call this Spartan - GenericMan.  That’s right, I brought sunshine and drinks, Tally brought pastels and pussy cats – my mate brought a generic brown outfit that would best be described as a shade of poo brown.  The three of us fought through levels 3 and 4 of Halo: Reach on Heroic difficulty; dying often due to the combination of transatlantic lag and the fact we are rubbish at the game.  However, despite or shortcomings at least we played as a team; the sun, the cat and the poop – together we were unstoppable (until we inevitably died again).

TALLY: As I woke up and got out of bed somewhat late on a Saturday morning, I thought I’d fire up the old 360 and see if Sam was on for our co-op meet-up. While it was an “early” 11:00am in New York, it was a late afternoon’s 4:00 over where Sam was in the good old UK. Seeing him online and in a co-op campaign game of Halo: Reach on Heroic with a friend, I barraged him with messages typed on my savvy controller chatpad (oh, yes, I do so enjoy typing out full words with a QWERTY board while most of my other xbox live friends must struggle with the on-screen, god-knows-why alphabetically-ordered keyboard) while I prepared my morning tea and yogurt (yup, tea - it appears that this was a match made in co-op heaven what with Sam’s impressive Spartan logo of Tea O’ Death and my actual consumption of tea, though hopefully with less death). Sam promptly invited me into their game, though secretly I believe this was to stop the unending rapid-fire messages.

“Sure,” I said to myself, “why not? It’s not like I’ve never played Halo on heroic diffic- oh, wait.” Halo: Reach is actually the first title in the series I’ve purchased, AND I never finished the campaign, AND it was on normal. Well, no worries. After playing console games with much of the staff (most of whom I’m fairly confident came out of the womb with a controller in their hands), I’ve acquired a small amount of confidence that I won’t be laughed out of the game. At least they keep their laughter on the other side of the microphone. I still consider myself a console newbie overall, with a keyboard and mouse sitting in my hands much more comfortably than a controller for FPS games. But no matter, heroic mode it was! I hoped I wouldn’t embarrass myself too much to my fellow staffer “across the pond,” as he put it.

As soon as we loaded in, something felt decidedly odd. Had I perhaps finally been able to slow down time?! Oh, no... it was just lag. As a PC gamer, I’m no stranger to lag, but this was some of the worst I ever experienced on the console. At times it got to the point where the server even stuttered for Sam and his friend in its wild attempts to boot me from the game. A few times it actually succeeded, but we pressed bravely onward. I’m fairly certain I contributed very little to the game, though I did make a handy respawning beacon a couple of times. From what I could tell from my lag-shield, though, heroic mode was not quite as insane as I was expecting. One thing I did manage to do was follow Sam off a cliff into the ocean... where we drowned... a lot. I was informed that following Sam can be a dire mistake.

When the game managed to kick me a second time and when my group member’s voices were completely stuttering as well, it was time to go. Despite the negative ten frames per second I was getting, however, I had a good time. Good company makes it a good time regardless, and some truly horrific lag makes you feel entirely pro later on.