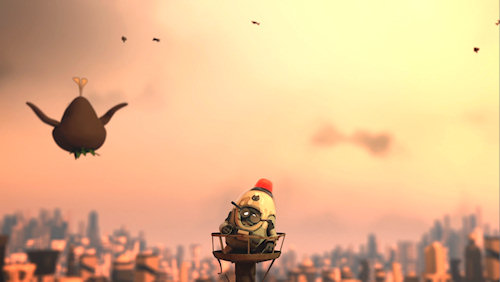 While the first De Blob game offered 4 player co-op in a special mode on the Wii, the new title - aptly named De Blob 2 will offer a two player co-op campaign for families to enjoy together.  The game has also expanded from a Wii only title to a multiplatform game with an Xbox 360 and PS3 version shipping as well when it launches on March 22nd.  THQ describes the new co-op mode a bit like Super Mario Galaxy, your co-op partner takes the role of Pinky and helps De Blob paint the town with color as well as destroying enemies and collecting power ups.

The latest trailer for De Blob 2 showcases one of the mini-cut scenes we'll see throughout it.  These shorts offer high production values filled with plenty of humor that reminds me a bit of those Pixar animated shorts before their feature films.  Today's short is called "The Air Traffic Controller" - and it seems like a job you really wouldn't want.