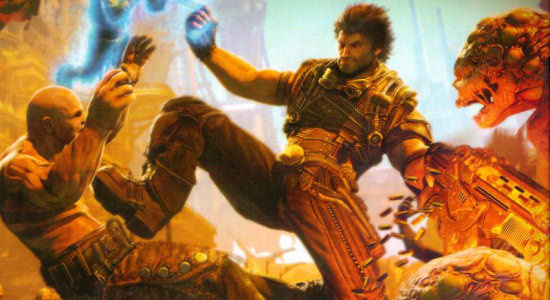 It’s something we’ve thought about, and finally someone had the opportunity to ask - but where is the co-op campaign for the testosterone-fest Bulletstorm? We know, we know. There is always Anarchy mode, complete with four-player co-op - but what about the story? According to the interview with Epic game’s Cliff "Cliffy B" Bleszinski (avid patrons of Bulletstorm), co-op unfortunately broke the game.

People Can Fly, Developers of Bulletstorm had the idea for the most over-the-top game we’ve ever seen, and it did contain full campaign co-op at one point. However, part of the game was lost in that campaign co-op, namely due to competition. That’s right, people were more interested in racing through the game, than taking their time to savor it together.

First off, [co-op] was in there at one point and it actually worked, but we found that the game shifted from being this kind of puzzle shooter into essentially this downhill skiing simulator, where people were seeing how fast they could get to the bottom of the mountain.

Really the game just broke down, and it was a situation where people would race through the game, ignoring the vistas and they wouldn't set up as many skillshots.

Since we have to “suffer” through the campaign solo, we were at least given the beautiful Anarchy co-op survival mode. Chaos, death, destruction, potty-mouths (yea, I said potty-mouth), and four-player co-op. It’s not story-driven, but it sure looks fun. Plus the co-op offers additional skill-shots that won’t be seen in the campaign, just in case you needed something else to look forward to.