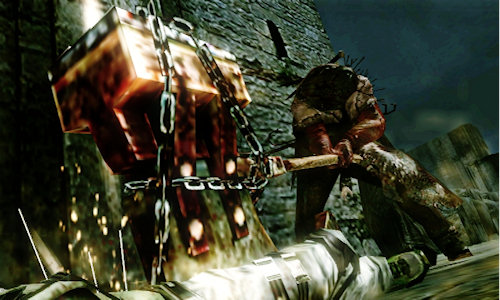 Hot on the heels fo the Nintendo 3DS launch announcement this morning comes fresh media from Capcom on what may be the only co-op title to hit the system in its launch window - Resident Evil: The Mercenaries 3D.  Sadly, as what's going to be an issue with all of the games on the 3DS system, the promotional media won't be viewable with its awesome 3D effect.  I even tried putting blinking opposite eyes in rapid succession and it didn't help.

The screens and video look pretty solid in their own right, the graphics of the system definitely seem to hold their own looking about on par with the PSP.  Check them out and let us know what you think.   Right now the game is scheduled for a "summer" launch and will ship with 2 player co-op either locally via Wi-Fi or online over the Nintendo Wi-Fi connection.