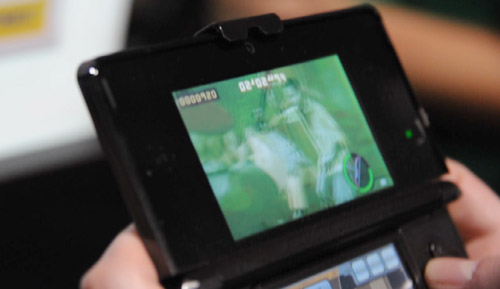 Getting your hands on a new piece of hardware is always an exciting experience. I feel that waiting until a week after trying out the newest in the line of Nintendo handheld’s has given me time to process the experience, and separate it from the excitement for a fair preview. While trying out the 3DS I also happened to play the first co-op title on the system - Resident Evil: The Mercenaries 3D. I suppose we could call this a double whammy, two birds with one stone, or the most convenient hardware trial available to a co-op website at PAX East.

The first time I tried the 3DS it was without a Nintendo representative present, so I just had to wing it. I can honestly say that everything on the 3DS is very straight forward - it’s basically a DS, only it has an analog stick above the D-pad, and there is a slider for the 3D in the screen. Everything else was very simple and easy to navigate on the hardware itself.

The two big differences between a DS and a 3DS are the 3D available to the system, and the Wi-Fi capabilities (a must for co-op). The Wi-Fi also works while the lid is closed on the DS to unlock items or mini-games if it detects someone nearby with the same game. Unfortunately for those who play portable games away from home, it sounds like both of these things will be a huge drain on your battery life - so that may be something to take into consideration. Those exact specs were not available at PAX East since the systems were plugged in and stationary, but one of the many reps at the Nintendo booth did say it may be an issue for some.

The wi-fi can be turned off, and the 3D can be adjusted via slide bar on the side of the screen to determine depth or turn it off completely. By determining depth I simply mean that you can decide just how much the 3D pops in/out, or doesn’t pop based on your personal preference.

One of the things that bothered me about the 3DS is that aside from the width of the screen, if the 3D capability is turned off it doesn’t look any cleaner than a regular DS. The graphics capabilities feel frozen in the DSPhat’s pixel count, leaving me less than impressed with the overall quality of brand new (not cheap) hardware.

3D as an up and coming thing is impressive in the 3DS though, since the system provides the 3D on its own without the use of glasses. The 3D in the 3DS works like a lenticular card, where you tip the card any direction and the image changes or pops out. While looking directly at the screen, the 3D stands out (or back, since the depth seems to drop backward in order to make the character pop out without extending past the screen), but from the side all you see is a jumbled line-filled image.

After the novelty of the 3D wore off on me after a day or so of “wow, I played a 3DS!” I feel the 3DS doesn’t add enough to the overall gaming experience of the DS to be worth a full hardware upgrade. The 3D is pretty to look at, and the analog stick is a great help when playing a game like Resident Evil: the Mercenaries 3D, but it wasn’t all that and a bag of potato chips.

The games are really what I am now focusing on to decide if the 3DS is worth a purchase in the future, including The Mercenaries 3D - though, I’d honestly be likely to turn the 3D off most of the time. Anyway, The Mercenaries for those who haven’t played the mode on Xbox 360 or PS3, is a survival mode that stars the cast from various Resident Evil titles. Playable at the show were Chris Redfield, Claire Redfield, Hunk, and Krauser. I played first as Claire, then later as Hunk.

The feel of The Mercenaries 3D was very similar to the version I played on 360, with one key difference. In the 3DS version, all of your weapons and inventory is visible on the touch-screen. This is handy since you can tap to change weapons instantly, and you can see everything at your disposal. Otherwise you’re still surviving in a town full of cult members or majini using weapons that your character specializes in, and you’re collecting time bonuses in order to make it to the extraction time.

Unfortunately as with many other survival games, The Mercenaries 3D got boring quickly by yourself. I’d say if any game were necessary to play co-op on a portable system, it’s this one. Mercenaries was originally made as a team survival mode for the full Resident Evil 5 game, and that type of heavily cooperative teamwork is still entirely necessary.

Thanks to online internet play, hopefully those of you planning on picking up a 3DS and Mercenaries 3D can take advantage of the co-op together, that part is definitely worth while.