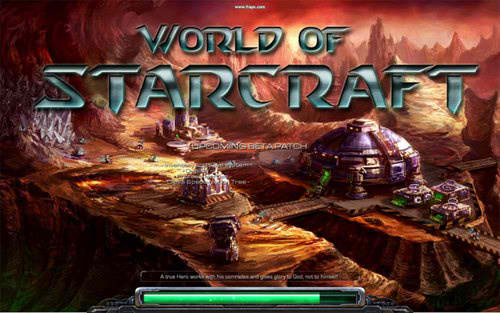 On Tuesday, January 18th, we brought you video of a Starcraft 2 mod called "World of Starcraft".  The mod was created using the tools packaged with Starcraft  2, you know, those crazy mod tools provided by the developers and publishers themselves.  Apparently, this video was a little too awesome for Activision Blizzard Inc. to handle, so they killed it.  It's dead now.  It has ceased to be.  You can't find it, anywhere.  The video has been pulled from YouTube with the old "This video is no longer available due to a copyright claim by Activision Games Inc."  So use the mod tools, just don't make anything Blizzard would want to make money off of.

The game's lead modder, Ryan, had this to say;

You (Activision Blizzard Inc.) created a tool that allowed us to do anything with your assets.  You encouraged us to use your assets and were eager to see what we might come up with. You had to have seen this coming?

Buck up there, Ryan.  They could have sent you a letter saying there are too many cheaters, and then threaten to shut down the Starcraft 2 servers.  In fact, why not shut down Battle.net altogether, Activision? That ought to teach all of the cheaters, and everyone else, a valuable lesson.

This leads many people to believe that Blizzard themselves are making a "World of Starcraft" game, but why would they want to do that?  Do you know how hard it is to get someone to maintain two drug addictions in this economy? Yeah, I'm hooked on crack (World of Warcraft), but now I need Crack Extra ("World of Starcraft")? And if I'm playing all these games and smoking all this crack, how the hell and I going to afford booze and cigarettes?  They would simply kill their clientele.  Two monthly fees are hard to justify. They know they need to ween us off one before introducing us to another.  So right as WoW seems to be losing its luster, expect serious rumblings about "World of Starcraft".

But who would be that dastardly?  That's almost like maintaining a war on foreign soil (let's say Tol Barad) over a limited resource, in order to keep the world's eye transfixed in a masterful misdirection, all while hoarding your own precious natural resources.  Suddenly, the Alliance is finally going to get their economy into the 21st century, and they're building thousands of  mines a week.  There's a billion of them, do you expect them all to take bikes to work?  No way, they're going to need cars.  (Do you know what kind of air traffic control you would need if everyone had a flying mount?) Then, right as you finish drinking everyone's milkshake, and it seems like the whole world is about to hit some sort of "cataclysm:" KA-frickin'-POW! -you've got all the oil! Yeah, the world economy is saved, but everyone (except for you) is paying $50 bucks a gallon.  Who would do such a thing?  Oh... well, shiii....

Anyways...don't make your mods too awesome, or Activision Blizzard Inc. will shut you down.  And stop cheating at Call of Duty: Black Ops, you bastards.

UPDATE: The mystery modder, Ryan, was offered a job  with League Of Legends developer Riot games. I guess the real lesson here is to make the best damn mod you can, and somebody will give you a job. Good work, Ryan.

Update to the UPDATE:  Looks like Blizzard is not that dastardly after all.  According to Joystiq.com, Blizzard has reached out to Ryan Winzen, and "extended an offer to the developer to visit the Blizzard campus and meet with the StarCraft 2 development team," which is very cool of Blizzard, assuming anyone ever hears from Ryan again.  Mwa-ha-ha.

Here is the full statement from Blizzard's Bob Colayco:

Earlier this week, a player-made StarCraft II mod called World of StarCraft and described as a StarCraft MMO was featured on a number of prominent gaming news sites, catching the attention of gamers as well as our own. With the name so closely resembling that of World of Warcraft, we wanted to discuss the title of the mod with the developer, and as part of our routine procedure, we contacted YouTube to request the video be removed while that discussion took place. We were also curious about the project and wanted to discuss with the developer what the mod entailed.

It was never our intention to stop development on the mod or discourage the community from expressing their creativity through the StarCraft II editor. As always, we actively encourage development of custom maps and mods for StarCraft II, as we've done with our strategy games in the past. That's why we release an editor with our RTS games, and why we feature top player-created content in the custom game search. It's also why we held a contest to spotlight the best community-crafted StarCraft II mods at last year's BlizzCon, and why we'll continue to improve Battle.net to better showcase player-created content.

Like many players in the community, we're looking forward to seeing the continued development of this mod, and as part of our ongoing discussion, we've extended an offer to the developer to visit the Blizzard campus and meet with the StarCraft II development team. As always, we appreciate all of the efforts of the talented and enthusiastic mod-making community, and we look forward to seeing and playing what they create using the StarCraft II editor in the future.

Pretty classy, Blizzard.  So to sum up, the real lesson here is to make a great mod, and then name it "Land of Spacecraft".  Or, do exactly what Ryan Winzen did, and then get a job offer along with a tour of Blizzard's campus.  Just make sure to support co-op play!