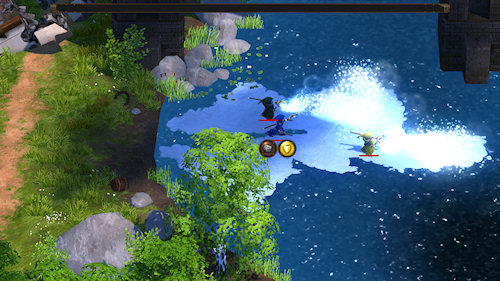 I know we've said this before, but this time its really happening.   Magicka has a release date, and that release date is tomorrow - January 25th, 2011.  The four player co-op spell casting action/RPG starring four wizards in robes will be hitting Steam for $10.  The game's concept is simple - players utilize different elemental spells to defeat enemies, but to truly shine, players can combine different elements to create spectacular effects and more powerful spells.  This was something we explored with great interest in our interview for the game.

Co-Optimus: Will the dynamic spell casting work between co-op players, as in blending elements to cause a slightly different effect when two spells interact, e.g., a bonus to power, an added status effect, or something likewise beneficial to attacking the same enemy?

Shams: Absolutely, besides what I mentioned before players will quickly see the benefits of one player hosing down enemies with fire and having his other friends chain-lightning their foes.

Sounds exciting - but you'll need to be careful.  Because another thing we learned in our interview is that friendly fire is on - and its on all the time.  You'll need to take great care that you don't accidently set a fellow wizard's robes ablaze.

The latest developer video for Magicka talks about why the decision was made for friendly fire and ways you can make it work for you.  Luckily, it seems you won't be penalized too much for damaging a friend - and healing/resurrecting is a cheap option.

Gotta say, I really dig how you can manipulate the environment to your advantage.  That was one feature we did not expect.  Magicka may have had a longer than anticipated road to release, but it looks like it was worth the wait.  If you aren't going to download the game via Steam tomorrow, you'll be able to find it in retail on February 15th.

For those of you waiting for the console version - Paradox and Arrowhead still hope to make it happen.  In fact, Paradox has gotten ESRB ratings for both consoles for the game.  The game was built using XNA technology - this means its already capable of running on the Xbox 360.  While a PSN release might be a bit more difficult and require more work, Paradox does still hope to bring it to the platform.  No timetable has been given though for either version.