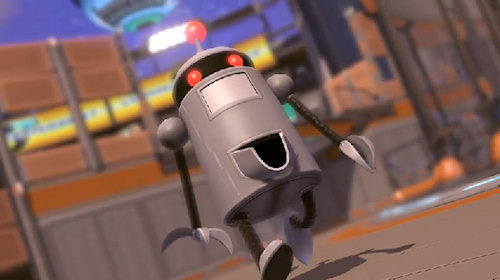 Monday Night Combat has launched today via Valve's Steam service.  With it comes not just a port of the Xbox Live Arcade original, but a game that's been carefully tweaked, balanced, and customized for PC gamers.  The game has gone through an extensive beta process yielding a really balance and fun experience in both versus and co-op.   Along with your standard PC settings like cutomized graphics options and lots of tweaks for the mouse and keyboard - you'll also find yourself enjoying dedicated servers!

Also - a new robot has been added to the game - Juicebot.  The bot by another name on Penny-Arcade will randomly spawn and throw juice upgrades for players to gather.

The game has a 4 player co-op mode called Blitz where players team up against endless waves of increasingly difficult robots.  To mix things up, there's a strategy element where players must balance cash and upgrades in tower defense like arenas.  The PC version even supports the two player split screen co-op that the Xbox Arcade version had.   Sorry folks - just found out it actually doesn't support this.

Monday Night Combat is out now on Steam for the price of $14.99.