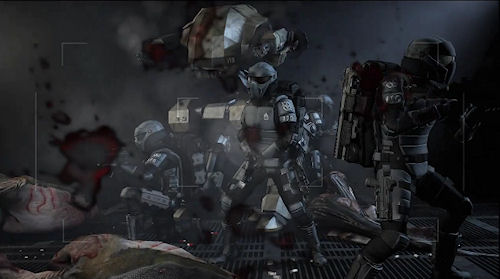 While the focus of Co-Optimus has always been on cooperative gaming, we also like to look at cooperative efforts surrounding gaming as well.  One of these unique stories is the independent and slightly community developed Interstellar Marines by Zero Point Software.  What makes Interstellar Marines so unique is that not it's four player co-op first person shooter, but one that is being almost completely community funded and driven.  Also it has space sharks.

Over time Zero Point is releasing small slices of the game that focus on specific systems - shooting, movement, etc.  The last one we saw was called Running Man, which came out in July, focused on combat in the game.  Soon a multiplayer focused slice will be released called Deadlock.

Zeropoint have put out a video showcasing new footage of the game and bringing you up to speed on its development.  Right now you can head over to the game's official website, sign up for a free account, and play any of the slices right in your browser.  The technology is pretty impressive, the game looks great, and there's even achievements and leaderboards to track your progress.  If you like what you play you can purchase the game now and contribute towards development.  Just watch out for those space sharks.