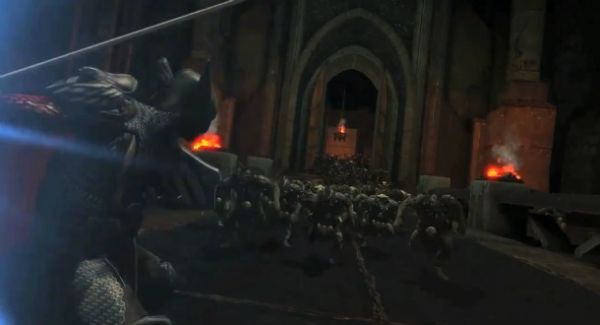 I don’t know about you guys, but I used to enjoy my Friday night get-together with my friends to play a bit of Dungeons and Dragons tabletop style. As we’ve grown older and had jobs and responsibilities, it’s been tougher to get together. We’ve often wondered “Why hasn’t a digital version of this come out for us?” And now our questions have been answered. Dungeons and Dragons: Daggerdale plans to do just that - bring Dungeons and Dragons to us in a digital format this Spring.

The folks over at Eurogamer have been curious about how the game works, so they posed a few questions to the developer, giving us a bit of insight into how the games co-op will look once it’s completed.

Eurogamer: Daggerdale's big idea is co-op dungeon crawling. Can you talk me through what my experience will be when I log on?
Zandro Chan: We have a very straightforward lobby system. Once players get in you can play the game in a number of ways. It has got a very robust single-player, and in addition you can play the game as intended, bringing friends together in a multiplayer environment. In Daggerdale you're able to play co-operatively online with up to four players, and you can also play couch co-op on a single box with two players.

If you’re curious about the social aspect aside from joining a lobby and dispatching some monsters, there are other things to look forward to in the co-op as well.

Eurogamer: What social features does the co-op play have? Guilds are probably a bit elaborate, but can we trade equipment, will there be social hubs?
Zandro Chan: Once players are in the game world they're free to chat and trade items. There's a trading system that's in there; a merchant system that you can go to different towns, different areas and talk to different merchants and NPCs and pick up allies as you go along as well. The world is living, breathing and there's an economy there as well.

And finally for those D&D fans that are curious which edition you’ll be looking at, it’ll be something familiar:

Eurogamer: How faithful is that to 4th Edition Dungeons & Dragons?
Zandro Chan: Everything we have system-wise in Daggerdale is based off of 4th Edition rules. We work extremely closely with Wizards of the Coast to streamline their system to make it work for an action RPG. A lot of their systems are actually in there, but because it is an action title as well as an RPG we truncated a number of different rules. And we worked with them to get that working properly. To get the rest of the interview, hit up Eurogamer for the details on single player, leveling, etc. We’re happy with what we’ve heard so far, and hopefully will be able to take the battle forward to more sequels to a game like this.