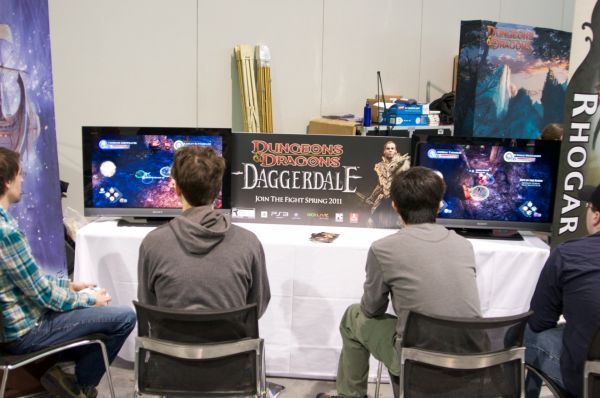 Baldur's Gate: Dark Alliance.  Yup, I said it.  Its a game that is often referenced but rarely replicated in the console world.  Now it seems only fitting that the inspiration for the Baldur's Gate series has become the basis for the game that's going to replicate Dark Alliance's gameplay style.  Understand the paradox?  After getting some hands on time with Dungeons & Dragons: Daggerdale at PAX East, I can confidently say this game feels perfect for fans of the Dark Alliance series, action RPG fans, and people with only $10.

D&D Daggerdale is actually part 1 of a three part episodic game.  In the game you can choose to play as a Human Fighter, an Elven Rogue, a Dwarven Cleric, or a Hafling Wizard.  Each of these characters are part of a bigger story that spans the three games - with each game focusing on 10 levels of character progression.  Daggerdale is obviously levels 1 through 10 of that experience, with your character coming along with you through the other two games later one.

There's plenty of character customization at play, despite not being able to build your character from scratch.  You can choose various weapons, armor, helmets, potions and accessories for your character - all of which are created by an in game randomization system.  The developer said there's an excess of one billion unique items in the game - and they end up with crazy names like Powerful Hammer of Overhead Orc Smashing +2.

Customization doesn't just stop at your items though - because the game is based on the D&D 4th Edition rule set, players can utilize the "feats" system.  By spending points in player feats, you can add passive abilities to your character like bonus damage with two handed weapons, resistance to elemental types, and even speed upgrades.  These abilities go along with your standard offensive abilities as well which can be unlocked and upgraded for various levels of power.  Notice I said "based on" the D&D 4th Edition  - somethings required the developers to bend the rules - like allowing wizards to cast spells more than once per day.

Finally the customization puzzle is completed by allowing total customization of the player controls.  While, by default, the face buttons on the controller are mapped to things like attack, block, and ranged attack - players can remap those default buttons to spells and abilities.  Pressing the left trigger also lets players access four additional slots for up to 8 different attacks that are quickly accessible.  Because of this, the combat in the game is extremely fluid and fast paced - allowing you to combo together your abilities.  While playing the warrior character I was able to unleashed a two or three hit combo quickly followed by a spinning attack move to dispatch enemies that had surrounded me.  Its very satisfying. Finally any of your special abilities can be charged up by holding down the button (and making you vulnerable to attack).  While playing the wizard character I utilized an ice storm spell that worked pretty well on single enemies, but holding it down till fully charge unleashed a devastating attack that held back the goblin hordes we were facing.

The game will scale the difficulty based on the number of players present and the highest level character in the party determines the enemy's level.  All character progress is transferred between local and online games and the experience earned  is shared amongst players by the damage done by that player.  All gold is shared evenly as well, but any items you pick up are first come, first serve.  Atari seems to have most of their bases covered for co-op players.

The game itself was a total blast to play.  Combat was satisfying, the graphics were decent, and there seemed to be plenty of story and quests present.  Even if you finish the 6-8 hour game you can go back and replay any section if you wish.  I was told you don't even have to choose any quests, but can simply head into the different dungeon areas to go loot hunting and level grinding.

Dungeons & Dragons: Daggerdale is set to hit Xbox Live Arcade, PSN and PC late this Spring for about $10.  After playing a good bit of the game on the Xbox 360 at PAX East it seems I'll need to find my Wallet of Extra Spending +5 for this one.