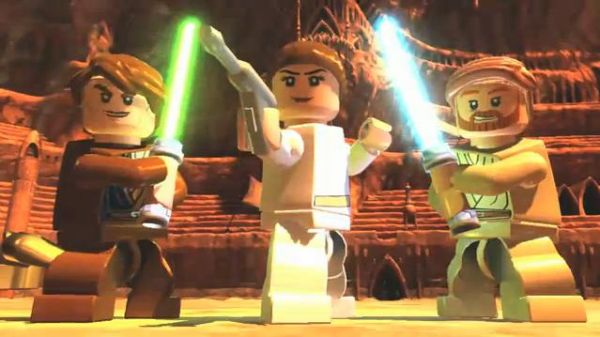 We recently let you know about the small delay for the release of  Lego Star Wars 3: The Clone Wars.  Today, to help dry your tears,  we bring you a new pre-launch trailer.  It covers some of the epic battles from both The Clone Wars and Attack of the Clones.  The new, more 'realistic' enviroments are all on display in their non-Lego glory.  The upgraded engine should allow for more blocks on screen than ever, which means more droid fodder for your humming light saber.  At one point a decapitated droid head is used as a weapon.  No word yet on whether or not this game will be ripped from store shelves for its graphic depiction of Lego violence.

Lego Star Wars III: The Clone Wars launches on March 22nd.  You will be able to join a friend via split-screen or online, depending on the system.  It is available for almost every major current platform, and even a future one.  That's the DS, PSP, Wii, PS3, Xbox 360, PC, and the upcoming Nintendo 3DS.