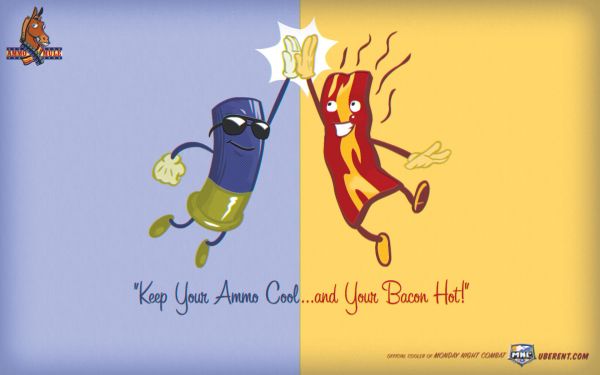 8461
Andrew's Take
The Super Bowl has come and gone and my awesome manly team crushed your pathetic sissy team. Just kidding! I’m a Bengals fan; therefore, I hate football, but love to watch it. With the waning of yet another season I was left with a quandary. Whatever would I do with my Monday nights?  I’m sure as hell not going to listen to the fluctuating accents on The Chicago Code. Luckily for me, it’s time for another round of This Week in Co-Op, and Marc had a brilliant idea.
MONDAY NIGHT COMBAT! And the sick thing was, it wasn’t even a Monday.  It was a Tuesday! Bizarre, I know.  But then what was all that about The Chicago Code? I don’t know, that was a whole day ago!
Marc had sent me a simple Xbox LIVE text message, “loading mnc patch. that ok?” This was going to be my first gaming session with Marc.  I know he’s been with the site for a while, so I wanted to make a good first impression.  I saw that he was online but his status said “Away.” I decided to send him a voice message over Xbox LIVE, and it went a little something like this:
That might not be exactly what I said, (I’m 100% sure it’s not even remotely accurate.  I think I just grunted into the mic for 15 seconds.) but I had finally recorded a message that didn’t suck that bad. (Why don’t I just turn the notifications off?  That’s a good question...)
Did I mention my wife was sitting next to me on the couch?  She was.  I probably recorded and discarded a dozen messages right next to her.  I looked over, somewhat ashamed.  She tilted her head sympathetically and said to me: “Tell me, did you have a hard time leaving messages for girls, or is this waaaay more important?” Burn!
DLC downloaded and confidence crushed, I started the matchmaking process.
Marc's Take
If only I had known how much was at stake, I might have listened to Andrew's message a little closer.  As Andrew's sense of self-worth had been destroyed quicker than a level 1 laser turret, we began our evening with the simplest of challenges, the Exhibition mode, with only ten levels of action.  This was good for both of us, as it had been many months since either of us had played.  Andrew played as the Tank, while I chose the Gunner, which I thought would be a good counterpart.  Indeed, the two did work together well, and as I recall neither one of us even died at any point.  As the action was so easy, we chatted a bit and got to know each other better.
We decided to step up the challenge a bit, choosing a 20 round season Blitz game.  Andrew stayed with the tank, and swapped to the balanced assault class.  I was really unimpressed with this guy, feeling like the benefits of flying and such didn't outweigh the short reload time.  Of course, that's probably just a playstyle thing on my part.  Andrew and I worked together quite well, and the chatting kept up.  I learned he grew up in Ohio, and he asked me how I got started with Co-Optimus (it's a long story, but it's pretty funny that my first news post was almost three years ago, for Aliens Colonial Marines, which STILL hasn't been released).  The going was somewhat tougher, with a couple deaths and even a moneyball breach at one point, but we lasted until round 20, victorious.
Until this evening, I had not played MNC with anyone except my 9 year old son, and we had never made it to the end of playoff Blitz, a rather more difficult 30 rounds.  However, we felt confident in our abilities, and so Andrew fired it up.  I went back to my favored gunner class this time around, and it seemed to work out far better.  The action was so intense that Andrew and I didn't get to chit chat much; our communications were related to "died again" and "I'll cover the right" and the like.  We had a couple nasty break throughs when we both died to Bouncers, and the Jackbots were extremely tough.  A coupel Gap Shots, left alive too long, decimated our defenses, and it looked pretty bleak.  However, we managed to barely scrape through the entire 30 round set.  The familar, coveted "Achievement Unlocked" blip sounded for me, and on that note, we decided to call it a night.
I had a great time, due to the excellent company and the fantastic game.  Monday Night Combat is one of the better titles available on Xbox Live Arcade, and to me, that is really saying something.  Andrew may have been nervous about wanting to make a good first impression, but really, he had nothing to worry about.  He had already impressed me when I learned he was a fan of Fist of the North Star as a kid!