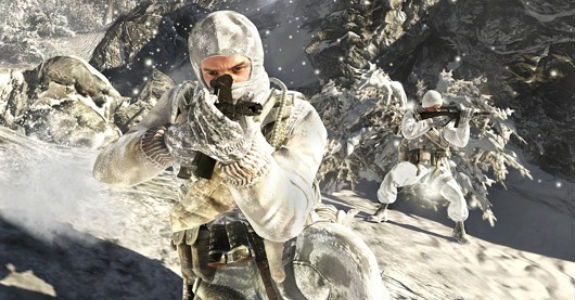 You're running harder than you ever have before. You can hear yourself panting and the crunch of your boots on the snow-covered gravel. Snowflakes fall peacefully, a stark contrast to the close-quarters battle at hand. Death could be around the next corner.
Toss a flashbang, or not? The sound would give you away, but you can't risk letting the enemy have the element of surprise. If there's someone waiting for you to step into their crosshairs, they'll put you down for sure.
You hear the chatter of gunfire somewhere behind you and to your left. Two frag grenades can be heard exploding, and then relative quiet. It's enough of a distraction that you make your move, and dash around the corner-- only to stop in your tracks at the sight of two enemy combatants. One raises his rifle at you. Your breath catches in your chest. Your heart stops.

It's exciting. It's bombarding you from all sides via digital surround sound. Human voices gab in your ear like the fallen soldiers that once fought beside you in war. And it's as photorealistic as video games have ever been.

There's a reason adrenaline junkies like Call of Duty: Black Ops and other similar action games. They create - and often re-create - theaters of war with as much realistic aural and visual detail as possible. Is it any wonder, then, that people who have experience real-life combat and the horrors of war may be more prone to Post-Traumatic Stress (PTS) episodes while playing these types of games? Stay Strong Nation, a non-profit veterans' organization, believes this to be the case. Experts at Stay Strong Nation say the bigger danger resides within veterans who have PTS but fail to admit or identify the symptoms.

A PTS episode can be very disconcerting, both to bystanders and to those afflicted - not to mention possibly dangerous. Sufferers of PTS have been known to inadvertently harm themselves and others during an episode, although incidents of that extreme are very rare. The point is: veterans who are diagnosed can be handled with appropriate care...veterans not aware of their condition can be triggered without warning, and I cannot imagine a positive outcome to someone suffering an episode during what is supposed to be a relaxing, fun video game session.

Games like Call of Duty: Black Ops act as a trigger whereby veterans think back to the realities of some of war's darkest moments, from a blown out tire on a jeep to carrying a deceased fellow soldier back from enemy territory.

I'll be the first to admit that when I can't afford the time or money to expend a case of bullets at the gun range, I can satiate my trigger finger with a dose of Black Ops or Battlefield: Bad Company 2. The level of complexity and immersion of these games is incredible - a sensory overload sometimes. And while it's not necessarily the violence that attracts a recreational shooter like myself (but rather the sport of it, and the challenge), violence is a large part of the game. Experts and research groups are constantly weighing in on the effects of semi- to hyper-realistic violent video games on adults and children alike...but until now there hasn't been any consideration for veterans who may be on the verge of a PTS episode.

Stay Strong Nation urges all veterans to realize the inherent dangers involved in playing or having exposure to war-simulation video games.

As someone who is very close to a small number of people with PTS symptoms, I found this research to be benevolent and appropriate. In terms of relevance to co-op, you'll recall that Black Ops features the Combat Training mode, which pits you against advance AI designed to resemble human players. Combat Training is just as hair-raising and energetic as the online multiplayer, and befits the description that Stay Strong Nation has put forth.

The other co-op mode, however, is probably less of a risk. I doubt that Black Ops Zombies is going to drudge up any memories of slaying the undead. If it does, two things are going to happen: 1. I'm going to start the Stay Dead Nation non-profit organization for veterans of zombie outbreaks, and 2. I'm going to add a guest room onto my house for every person found to have Post-Zombie Stress Disorder. 'Cause you can never have enough of those handy. By the way: if you would like to donate to the Stay Strong Nation group, you can do so at their website. Also check out their Twitter feed and Facebook page for more news that may concern you or someone you know with PTSD.