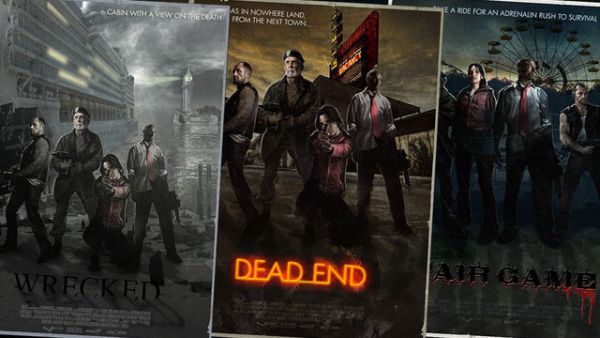 Left 4 Dead did a lot of things very right. One of those things is creating a campaign of movie posters to represent each scenario the four survivors, Zoey, Bill, Frances and Lewis had to endure. The movie posters were also applied to DLC that came later, and the sequel - Left 4 Dead 2. Some of the original concept posters have surfaced for the original survivors, and some of the art or situations may look familiar.

Looking at the gallery below you'll see the movie posters for some unreleased content for Left 4 Dead. Looking at them after the release of Left 4 Dead 2 it's become apparent that some of the challenges of the first game were clearly tackled for the second; namely the insanity that is the Swamp and Carnival scenarios. Bits and pieces of the hotel, and large body of water can be seen within various other levels. This batch of posters may be a hint as to what may be upcoming for the series - or, it may just be some neat movie posters to take a look at.