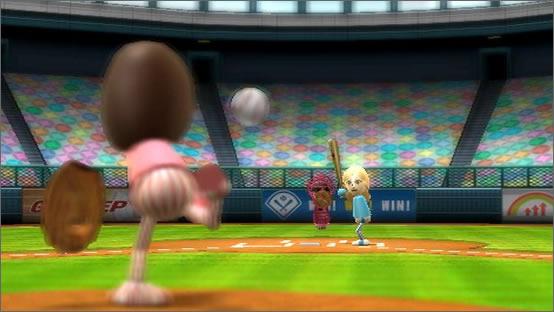 I’ve been waiting a long time for this. A long time. Once a poor little rugrat occasionally denigrated to a cutesie photo op by her parents for entertainment’s sake, my daughter is several months from three years old and has accepted the fact that she is a gamer daddy’s little girl. As such, she is often subjected to the allure of colorful gamepads and the curious moving images they control on the TV whenever Dora and Boots aren’t busy looking for the Muddy Mountain. Alright, so maybe it's only been two years; but the anticipation has been no less. Finally, the time has come: let the experimentation with video games commence! The Xbox 360 controllers being the monsters that they are - a perfect fit for big, beefy manhands like Andrew Gaskill’s, but not so much for Jayden’s - I opted to go simpler. The Nintendo Wii remote and its motion controls are perfect to start off with. At first I tried to get her to hold it in classic style, but she insisted on holding it the way Mommy does when she’s playing Wii Sports (I swear, if you all keep laughing, I’m keeping you 30 minutes after - pipe down). So Kirby’s Epic Yarn was out for now. It was for the best, though, because after a quick perusal of our inventory, I decided to pop in Wii Sports (stoppit now!) after all and fire up some Tennis matches for a little bit o’ comp-stomping. She didn’t get the hang of it immediately. Okay, she never got the hang of it. But I was able to parry back and forth with the AI players, and she was content for her Mii to sit at the net and swat the ball from time to time. The concept of “hit that ball or we lose” never once occurred to her. I got to play Wii tennis, and she got to participate without interfering with the challenge level. Pure bliss for both of us.

In between matches, she figured out how to point the cursor and otherwise make a mess of the menus screens. Daddy pushed many a “back button”. Next we tried Baseball. At first I was concerned that she wouldn’t have correct timing with the batting segments - and my concern proved true - but she was able to throw pitches without any problems whatsoever. In fact, she so enjoyed seeing her Mii throwing the ball at the camera POV (her POV) that she traded Wii remotes each inning. Her attention was ultimately short-lived, but the fellowship that I had with my little girl is something that I aspire to include in my forthcoming years. Not too far behind her is her younger brother, Donovan, whom I suspect will be cause for even more fun gaming stories in the future.

One negative discovery of note came from this experience, and it’s something that gamer parents should pay close attention to... When it comes time to decide whether or not to sell the Nintendo Wii or Xbox Kinect for something more worthwhile, only one vote counts: the 85-decibel scream.