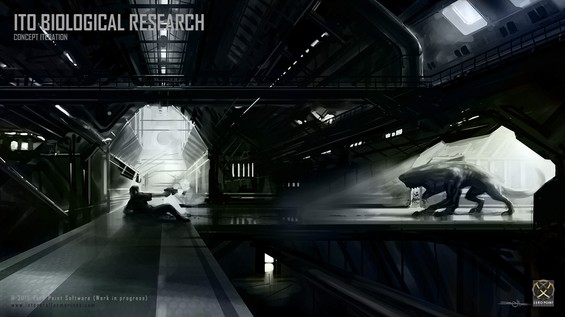 We've waited and waited for the release date of sci-fi FPS Interstellar Marines to be officially announced, in spite of quite a bit of turbulence surrounding its development. To tide us over until the full games releases, it looks like Zero Point Software is giving us a prequel story to the full game. This story will be released on Xbox LIVE Arcade, Steam, and Playstation Network long before the full title is released.

...So we hope to instead of just releasing the game is to release a prequel of Interstellar Marines to focus on the back-story of the first tries to initiate the Interstellar Marines program, which is actually a big part of the back-story for the game. And we hope to be able to release that as a small game on XBLA, PSN and Steam, hopefully not too long into the future. Just to get the co-op and the tactical role-playing and all that going, so people get something while waiting for the full game.

In case you missed all of the news surrounding Interstellar Marines development, the studio had laid off all employees and filed for bankruptcy at one point, then came back kicking. Their full blogsite Interstellarmarines.com posts news, forums, and videos for the fans of the series.

With enough followers and a hopeful success of the XBLA/PSN/Steam (fully co-op) prequel game, we'll be seeing Interstellar Marines somewhere down the not-too-distant line.