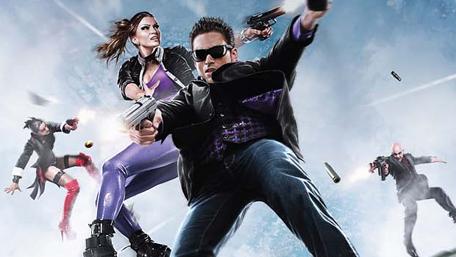 Who packs a girl instead of a parachute?

Now that Saints Row: The Third has been officially announced, news is starting to leak out about the game like ooze from a bling based bullet wound.  The latest copy of Game Informer has some new details about the game and one aspect that caught Co-Optimus' eye was that Volition deliberately dropped multiplayer so that the co-op would be stronger.

This attitude is in direct contrast to other developers who drop co-op in favor of the single player campaign, or multiplayer.  Could the continued success of the Saints Row franchise prove that co-op is the way forward for the industry?

Alongside the news that the game is being developed with co-op in mind, are more details about the gameplay itself.  Saints Row: The Third will have a GTA: San Andreas style XP system which will determine how strong, fast, skinny or fat your character is.  If you eat too much you will pack on the pounds, but if you punch a lot 'o' pimps you will increase your melee strength.

Although the way a character evolves has changed, some things have not.  Volition has guaranteed there will be plenty of outlandish outfits to wear, as well as pimped out cars and choice weaponry (including Dead Rising 2 style adult toys).  The vehicles and weapons in the game will be customizable so you can improve their range, fire power, speed, pimposity etc.

The new RPG-lite direction that Saints Row: The Third is taking will also impact on the way you can tackle missions.  Game Informer uses the example of a siege mission.  Are you the type of player who will burst through the front door and move from floor to floor killing absolutely every mother trucker in the building?  Or would you simply buy loads of C4 and blow the entire building up?  These new options suggest that Volition have been learning a thing or two from their own Red Faction franchise.

With its interesting new gameplay elements and co-op integrated from the start, Saints Row: The Third is certainly a co-op game worth keeping an eye on.