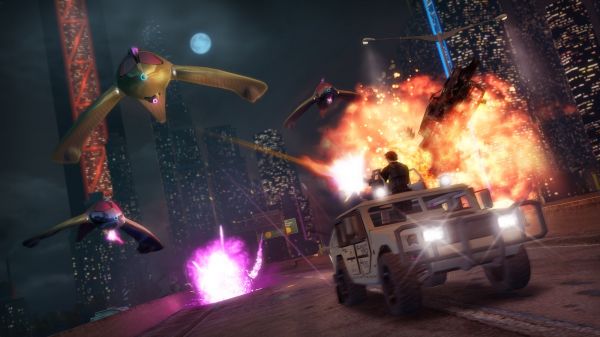 The second mission-based DLC for Saints Row: The Third, "Gangstas in Space," dropped this week.   I put it through its paces and I'm going to let you know if it's worth your hard earned (or easily stolen) cash.  As an added bonus, I'll give my impressions on SRTT's other mission-based DLC, "Genkibowl VII," because I just realized we haven't covered it yet.  That's two impression pieces for the price of one!

First things first: Both players need to have purchased the content to be able to play cooperatively.  The co-op works exactly the same as in the full title.  (You can see our Co-Op Review here.)  Mission progress in a host's game is carried over to the guest's game.   Both DLCs are priced at $6.99, or 560 MSP.  For those of you keeping score, that's a little more expensive than $5 DLC, less than $10 DLC, and way less than the price of a Call of Duty map pack.  Each add-on offers 100 points of Achievements, or an assortment of bronze and silver trophies, if you swing that way.  Both DLC's offer rewards such as new vehicles, clothing, and Homies that can be used in the full game. I wish I had this image on my Trapper Keeper in grade school.  For the ladies.

"Genkibowl VII" offers more of the insane activities you've come to know and love.  There are a few small cut scenes, but this is basically just an activity pack.  The new missions will pop up on your cell phone as they become available.  The Genki Girls; Angry Tiger, Sexy Kitten, and Sad Panda, have each devised their own twisted Genki event.  Check out the following video for a taste of the action.

I see Genki is keeping it cool, calm, and collected as always.  That video pretty much sums it up.  Go nuts.  Kill up a ton of Furries with a chainsaw, roast pedestrians with your flame-throwing car, or crush more Furries with a giant ball of yarn. The four new activities come in the Easy and Medium variety.  You can replay these as much as you want, similar to how you'd play the "Tank Mayhem" or "Trail Blazing" instances.

Okay, let's make a game of it.  I'll list the activities, and you see if you can tell which one is which from the video. Maybe I'll provide an answer key at the bottom of this post.  (I won't.)  The new activities are: Apocalypse Genki, Super Ethical PR Opportunity, Sexy Kitten Yarngasm, and Sad Panda Skyblazing.  All four instances are just as insane as you would expect.  None of the activities are particularly challenging, but all of them are fun. They're right at home in the Saints Row universe.  Watch out for the Water Bear! Did you expect the aliens to not be busty women?

"Gangstas in Space" is a story mission pack.  You actually have a goal that's slightly more established than "kill and destroy everything because you can."  You're still going to kill and destroy everything, but now you're given direction.  The mission can be activated through your cell phone.  Show up to a movie set and get your Brando on as you act your way through a big budget production.  Shoot bikini clad aliens, use cool new alien weaponry, and pilot alien vehicles.  When all is said and done you'll get some nice stuff to use in the regular game.  Check out the launch trailer. (NSFW language)

When the action picks up the screen gets all grainy and a cheesy sci-fi soundtrack plays in the background.

You know, because you're in a movie.

Overall, "Gangstas in Space" is a wild, but brief, ride.  There are some nice co-op moments where you may have to cover each other while powering down generators.  A particulaly gruelling chase scene has one player manning a Humvee's turret while the other rides shotgun.  Unlike the other story missions, you can play through this one multiple times.  The only thing that really disappointed me was the fact that none of the badass alien weapons can be unlocked for use in the full game.

Are these DLCs worth the price of admission?  For me, no.  Seven bucks is a little pricey for the content. "Genkibowl VII" and "Gangstas in Space" each took no more than two hours to complete. They can both be replayed, but how often do you replay the regular activities?  If you answered "constantly," then you should probably pick these up.

Both of these add-ons are little more than a distraction for high level characters.  The cash and respect rewards are of no consequence.  We got insta-killed a few times in a frustrating chase scene, but other than that, there's no challenge.  Of course, SRTT is a pretty easy game to begin with.  The progression system is so well paced that most players have maxed out their characters by the time they finish the game.  If you haven't maxed out your character most likely you still have tons more of content to cover.  If you are at looking for more challenges, chances are you're at level 50, which makes these activities ridiculously easy.  No, they don't raise the level cap.

If you enjoy the unbridled insanity of Saints Row: The Third, and if you replay the challenges over and over again, you won't be disappointed.  These add-ons are very entertaining, but I'd say they're about five bucks worth of fun. Causal fans will want to wait for a sale.