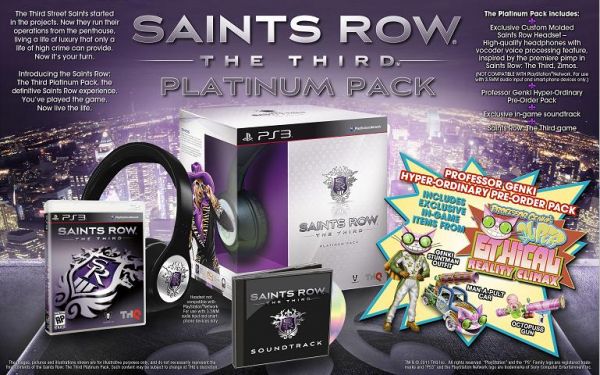 If you have seen any of the videos for Saints Row: The Third, (whether they were an eight minute montage of mayhem, or one delightful second of gameplay footage) you know this game is going to be something special.  THQ has recently announced a collector's edition of the game.  The Saints Row: The Third Platinum Pack Collector's Edition will feature the Saints Row soundtrack, the Professor Genki Pre-Order Pack (more on that later) and a pair of molded headphones which have an auto tune feature.  Unfortunately, these headphones are NOT COMPATIBLE with Xbox Live or the PlayStation Network (They're for use with 3.5mm input and smart phone devices).  The Platinum Pack Collector's Edition will cost $99.99.

But wait!  There's more!  If you pre-order any version of Saint's Row: The Third you will get Professor Genki's Hyper Ordinary Pre-Order Pack for free!  What the crap is that, you ask?  Hold on to your face, you're about to get Genki-ed!  Professor Genki’s Super Ethical Reality Climax is a TV show that has captivated the populace of not only Steelport, but the entire world:

Popular Genki Games include Baby or Cobra, Monkey Money Grab, and Professor Genki’s Super Sparkle Lab in which one Steelport resident  gets to fight through Genki’s booby-trapped laboratory, shooting targets for points and humans just for fun.  But look out!  Shooting the helpless panda makes everyone sad.

Hmm... Okay, I know that sounds interesting, but you're probably having a hard time picturing it.  Open your head holes to this:

WARNING: YOU ARE PROBABLY HAVING A SEIZURE!   MEOW!

That just ******* happened!  Where to begin?  The pulsating boobs?  The throbbing man-region?  The Ric Flair strut at the 41 second mark?  I can't not want this.  For those of you who have just picked themselves up off the floor, here's what you missed:  Professor Genki's Hyper Ordinary Pre-Order Pack includes:

Cruise Steelport in style with this vacuum-action human-cannonball truck. Suck up pedestrians and use them as live ammunition against the forces of evil, and everyone else.

Fire baby octopi onto your enemies’ heads! Watch as the octopi massage their scalps and your enemies fight for you! Enemies can be friends too!

The ultimate in comfort and tight-fitting apparel, the Genki Leisure Stunt Suit is perfect for skydiving over Steelport or to wear while ejecting from high-flying fighter jets. Free Genki mask included!

You can see more whacked out zaniness in the picture below.  Saints Row: The Third will be out on November 15th for the Xbox 360, PlayStation 3, and PC.  It will support 2 player local and 2 player online co-op.

SZJ!  There's even more!  The first 3000 North American customers who pre-order Saints Row: The Third from the THQ online store will receive a free Saints Row Season Pass.  Apparently the game is some sort of theme park, now...  Nope, my mistake.  The Saints Row Season Pass will include three downloadable mission packs (valued at more that 20 smackers)!  You heard that right!  Three additional DLC's just got announced FOUR MONTHS before the game's release date.  I guess the only thing to say is: Me-ouch.  "Me-ouch!" Get it? It's funny, because Professor Genki is a cat and THQ basically just made Saints Row The Third's price point over 80 bucks. Me-ouch indeed.