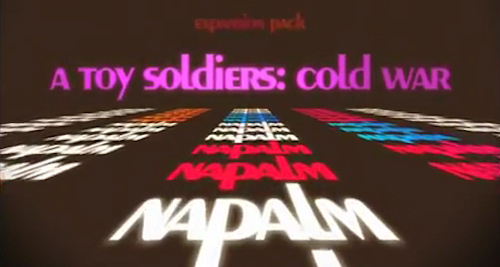 The folks at Signal Studios are releasing not one, but two DLC packs for the action/tower defense game Toy Soldiers: Cold War.  It's a game we scored quite well calling it an "absolute blast" as we played through almost the entire campaign in a 5 hour couch co-op session.  Now after a long wait since the last DLC, we're finally getting some new content to dig our little plastic soldiers into.

The two packs are called Evil Empire and Napalm.  In the Evil Empire campaign you'll play as the Soviets and attempt to stop the American "aggressors" while the Napalm campaign takes the Cold War to the far East for a "Vietnam" campaign.  Both packs include a new survival mode as well.  Evil Empire includes one called Trauma that adds extra strategy to the mix by damaging the toy box for placing extra turrets.  Napalm's survial mode is called "Survival Man" which lets you control the Commando or Ivan and defend the base without the aid of turrets.

Here's the rundown of what's included in each pack:

Each pack will set you back 400

In other Toy Soldiers news, the first game is coming out today on the PC via Steam and includes that game's two pieces DLCs - The Kaiser's Battle and Invasion! for free.  You can get it for the same price as the console vesion, $9.99 - and it includes Games for Windows Live functionality and the same Achievements as the original XBLA game.