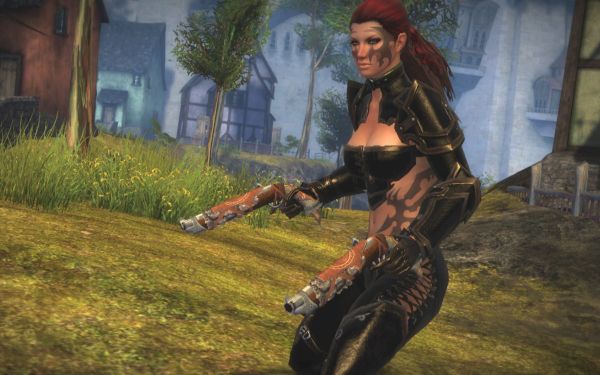 I would be a bloody liar if I said that Guild Wars 2 wasn’t one of my major reasons for going to PAX East. I’ve been playing the original Guild Wars since the launch of GW: Factions back on April, 2006. Guild Wars is the game I always fall back on when I’m in-between games, and as a result, I’ve logged over 2,000 hours in the game. It’s safe to say I’m pretty darn excited about the sequel. That may or may not have come across in the preview I wrote up last fall. Mike and I had the opportunity to have an interview/demonstration with the developers and Mike, Nick, and I all had a chance at other times during the event to try out the game for ourselves.

The interview consisted of four of the fine folks from ArenaNet and was mostly led by Lead Content Designer Colin Johanson and Designer Jeff Grubb who’s behind much of the lore of the games. Colin talked about the mechanics and gameplay side of things and Jeff detailed the personal story and customization of the characters one can play in the game.

The demo started out with creating a Norn Guardian (a profession that was announced at the very end of January). The Norn are one of the five races available for play in Guild Wars 2 and while at first glance they may appear to be simply “large humans,” they’re complete with their own unique traditions and values. Jeff walked us through the various choices one can pick on character creation that create differences in the experiences players have playing the game. For example, one of the questions involved what happened at an alemoot your character attended. You could choose that you blacked out, swore vengeance on a foe, or lost an heirloom. Somewhere down the line, this decision will manifest in the game and give your character an opportunity to do something different than the other choices. There were several other questions that further customized the personality of your character (e.g. how you deal with confrontation, your choice of totem animal, etc.). After making these choices, we were launched into the Norn starting area. The first thing our guardian did was talk to an NPC to progress his personal story. We were greeted with a full-screen conversation between our guardian and said NPC that was fully voice-acted. Colin informed us they’re not interested in presenting players with walls of text - things should be more immersive than that. In line with that view, the game will not have any traditional questing. Everything you do will be associated with your character’s personal story or be a dynamic event out there in the world. Anyway, our guardian was informed that to join the Great Hunt, he would have to prove his worth by hunting three ferocious beasts located nearby. These beasts weren’t just all waiting out in the world to die, however. One of them required our character to shake a bush to scare it out, another required he reset a trap to cause it to appear. Throughout this, another character was doing the same thing nearby. As Colin pointed out, in many MMOs if you see someone doing the same task as you, it’s usually groan-worthy as now you have to worry about them stealing your kills. In Guild Wars 2, however, they want you to be excited to see other players. Every player that participates gets credit for the task, and every player can loot the mob. Our guardian collected all his hunt trophies will no delay (in fact, it was probably faster!) due to the other ungrouped player doing the same task.

After presenting the trophies, our character was deemed worthy for the Great Hunt alongside the Norn champion in the game, Eir Stegalkin. After running a short ways with her and our other Great Hunt-worthy Norn allies, we were confronted with an enormous Frost Wyrm. This was a foe worthy of battle! This is the point that in other games you’re still killing five rats or collecting wolf tails, Colin enthusiastically pointed out. In Guild Wars 2, they want you to get into the epic action right away. As the encounter with the Frost Wyrm is a dynamic event, it will scale as more players join in. What this means is that perhaps more smaller adds will show up, or the boss will start to do some fancier attacks - that kind of thing. After a short while of fighting the Frost Wyrm, it was defeated (the difficulty had been scaled down for the demo in order to get through it quickly), and our Norn guardian was commended for his hunting prowess.