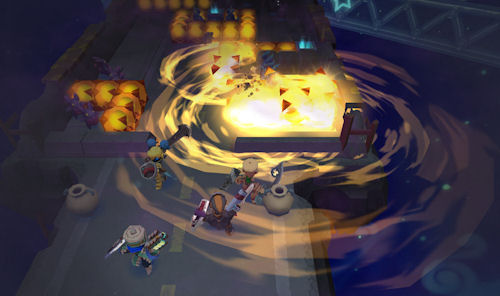 Free to play games seem to be all the rage these days...and with good reason.  Sega's join the foray with a free to play game that only requires a web browser and java installed called Spiral Knights.  The stylized game puts players in control of their own knight in a isometric Action/RPG.  Best of all the game supports four player co-op to complete quests, kill monsters and solve puzzles - many of the missions are designed just for co-op play.

I decided to give the game a spin this morning and it took no time at all to get up and running.  I was literally playing the game within 2 minutes of clicking the "Play" button on the Spiral Knights home page - that's something that's hardly seen on a console these days, let a long a PC.  Gameplay seemed pretty straight forward, but the combat was oddly satisfying thanks to a small combo system - the game even supports a gamepad if you plug one in.  Like any good action RPG there's plenty of loot to collect  and character customization options, it seems pretty easy for co-op players to create their class of knight.

The world of Spiral Knights apparently changes over time, with "every moment of every day" changing the world.  In a nut shell - that just means random levels.  The world is called Cradle and its filled with numerous creatures and areas to explore, each one is said to have their own theme.

As with any free to play game, there always seems to be a catch.  Some sort of microtransaction system in place to bring in the money.  As far as we can tell, its either not in place yet - or not very obvious.

Update:  It seems the game is using a limited time play method for transactions.  While you can enter dungeons a set number of times a day, if you want to enter further you'll need to cough up the coinage.  The game will prompt you when you run out of energy if this happens.

You can try Spiral Knights for yourself by visiting www.spiralknights.com.