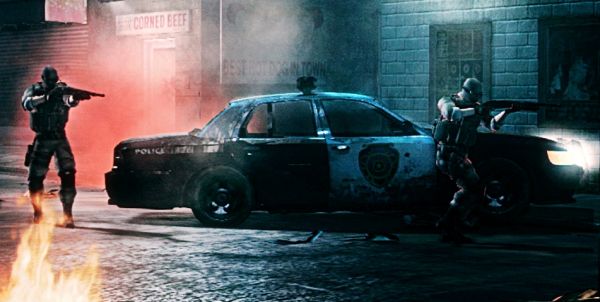 The controls. The pacing. The plot. These are the elements of the core Resident Evil series that provided fans the confidence to keep coming back. The first Resident Evil was completely adverse to your typical action game, despite the presence of guns, thrills, and eventually even co-op. This staunch formula developed a diehard legion of fans, and has grown the franchise so large that its name alone was enough to market six films with worldwide theatrical releases...not to mention 23 videogame titles that have experimentally branched into several genres.

That very formula has proven to be a double-edged sword, however, as there are millions of gamers still disenfranchised by the very plot and pacing elements that have garnered the series' niche. Oh, and the controls. Egads, the controls. Countless debates and backlash from consumers with shorter attention spans and a taste for fast combat. Capcom's latest answer? Resident Evil: Operation Raccoon City, and an odd partnership with Slant Six Games.

Once known for their hand in helping Sony Bend bring the Syphon Filter series to the PSP, this Vancouver-based studio built street cred among publishers by wading into mainstream development; namely, the SOCOM series. After lending their skills to Sony for five tactical shooter games, Slant Six has joined the Capcom family for a spell...and the result seems to be pretty much what you'd expect. Resident Evil is no stranger to mashups and genre bending - there have been several spin-off games that ranged from arcade style shooters to mobile puzzle games - but this may be the first time that a title in the series has been announced with such a blatant premise. Some featured previews have already labelled Operation Raccoon City as "SOCOM with zombies"; how well this will click with the less patient gamer crowd has yet to be seen.

One thing's  for sure: Slant Six doesn't seem to be fixing what isn't broken. Critical though the SOCOM hardcore fans may be, there's no denying that Slant Six helped push continued sales even as the creators - Zipper Interactive - dropped out for another Sony pet project, M.A.G. Heavy creative innovation appears to be taking a backseat to tried-and-true gameplay, with some series-related twists and small, interesting quirks that ultimately may set the game apart.

Operation Raccoon City's original announcement leaned heavily on the team vs. team vs. zombies concept, and all the mayhem that would imply. While not entirely unique, the prospect is still exciting. It opens up a number of gameplay possibilities, like using the "neutral" zombie horde to your advantage. Stephen Totilo described what I call the "hemorrhage scenario" in his hands-on preview, wherein an opposing player was wounded...bled profusely from the wound...and was eventually mauled to death by zombies and bio-organic weapon creatures that the blood had attracted. Presumably this scenario will play out similarly in co-op matches. Screenshots and videos also indicate the possibility of being able to use zombies as [not] human [anymore] shields, something I never thought I'd be doing in a video game. The co-op campaign of Operation Raccoon City will be played from the perspective of four Umbrella Corporation operatives - yet another small bit of deviance that may serve the game better than grand, overreaching innovation. Four characters will each feature a set of class-like abilities and weapons, cornering players into some degree of cooperation. Co-op is becoming more and more prevalent in Capcom's games; so much so that the Official Xbox Magazine felt safe in claiming that co-op was an "obvious inclusion", especially after the success of Resident Evil 5.

Sticky cover and a third-person perspective (with zoom-in precision aiming) round out the floorplan of Slant Six's endeavor. At best, Operation Raccoon City will change the face of Resident Evil (producer Masachika Kawata has vocalized the possibility of a new direction based on this title); at worst, it will be an interesting experiment that sounded really good on paper.