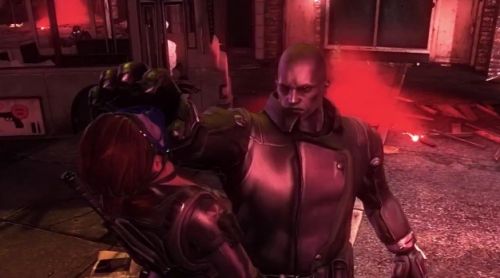 Ah Mr. X, we meet again.  How many times did you crush Leon Kennedy's skull with me at the controls?  Were there dozens - maybe hundreds, of head squishings?  Seriously, I can't remember.  I played through Resident Evil 2 multiple times, but that was about 14 years and a million beers ago.  I do remember that Mr. X knows how to make an entrance.  I'm glad to see him back in action.

The latest video for Resident Evil: Operation Raccoon City demonstrates some of the skill sets the different characters bring to the fray.  You can tell the Umbrella Security Service (USS) members are the bad guys by their dark clothes, dehumanizing masks, and gravely-voiced Jack Donaghy  impressions.  The US Spec Ops Team, Echo Six, appear to be the good guys, because they... don't have masks?  Whatever.  As a member of the USS, your mission is to kill up all the zombies and bee-oh-dub-yas, as well as any witnesses to the Umbrella Corporation's crimes against humanity.  It's refreshingly evil.

Resident Evil: Operation Raccoon City will be released on March 20th for the Xbox 360, PlayStation 3, and PC.  It will support four player online co-op.  I'm going to go out on a limb here and say we can expect an Echo Six campaign to follow in the form of either DLC or some type of Super/Turbo edition.  This is Capcom, after all.