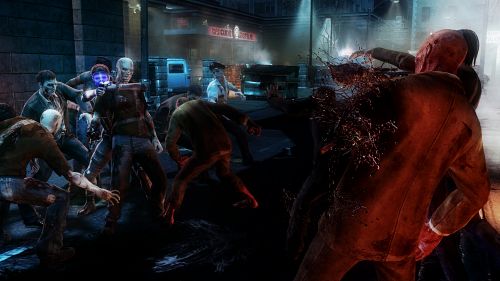 We have three new videos for Resident Evil: Operation Raccoon City, courtesy of GameTrailers- which presents us with a little conundrum.  One of the many hardships that comes with covering video games is the amount of spoilers one can be exposed to if they're not careful.  I'm really looking forward to this game, so I'm trying to present these co-op gameplay videos to you without having actually watched them.

Okay, I watched them, but I leaned away from the screen and covered my eyes, peering through my fingers.  I definitely didn't have the sound on... alright, I had the sound on, but I've got two screaming babies, a pair of barking pugs, and Sesame Street on in the background.  I'm assuming the Umbrella Security Service is battling a zombie horde, trying to feed a screaming baby while being chased by dogs, and the whole thing is brought to us by the letter "E."  These videos feature some cool gameplay elements, and there are some spoilers, which I'll briefly cover after the break.

SPOILER-ISH ALERT:  The "Warehouse" vid has what could be considered plot spoilers.  There are a few cooperative gameplay elements you may or may not have been aware of.  Players can blast attacking enemies off of their comrades.  They can revive each other when downed.  It appears that you can be turned into a zombie and then be  resurrected, but it was difficult to make out because all three of the videos are so damn dark. The players demoing the game aren't the best shots, but you can still get a vibe for the frantic nature of the gameplay.

The Streets: Check out the sweet melee combos.

The Warehouse: If you look closely, you can see icons depicting which characters need aid.

The Cemetery:  Getting separated from your squad mates looks like a good way to get dead.

Resident Evil: Operation Raccoon City hits store shelves on March 20th.  It supports four player online co-op, and it will be available on the Xbox 360, PlayStation 3, and PC.