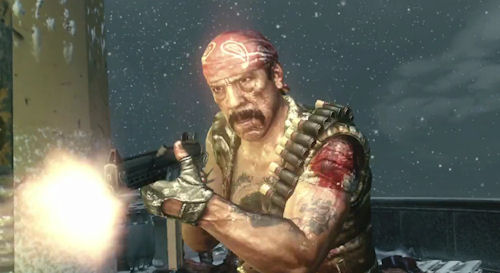 Is that Danny Trejo?  You don't even know!  Stop what you're doing and watch this trailer now!

That just happened!  Machete, Buffy, Freddy, and Merle Dixon are all killing zombies together. Beautiful! Complete with the music from Return of the Living Dead, I don't know if I want to play it or watch it.  Dave Anthony, Call of Duty: Black Ops director, couldn't be happier:

This is Treyarch's tribute to the legendary George Romero, who truly defined the zombie genre and whose incredible work has been such an inspiration to our team.

"Call of the Dead" is the new zombie map from the Call of Duty: Black Ops Escalation Map Pack. Two players can play split-screen, or four people can co-op online.  It will be out on the Xbox 360 May 3rd (that's next week), with a PC and PS3 release to follow.