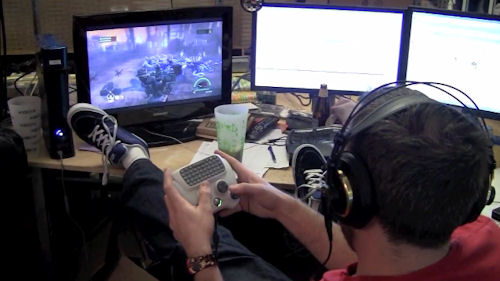 It's just a couple of dudes sitting around and relaxing, having a few beers, and talking shop.  The first developer diary for the Xbox Live Arcade game Trenched is one of  the most laid back and down to earth dev diaries you'll ever see.  In it we learn how Trenched started as part of a studio wide brainstorming session where a bunch of games got created in a short period of time; games like Stacking and Costume Quest.

Trenched is a four player co-op tower defense game where players build and customize mech like robots to defeat waves of enemies.  While tower defense is nothing new, this eyes in the battlefield sub genre of it has taken off - especially with adding multiple players to the mix.  That co-op piece was a key in the game's design, and the team is looking forward to seeing how players who are stuck in the game's single player modes team up to conquer it in multiplayer.

"Just having people help each other out...I don't think having hatred can come out of this game."

Like Brad says in the video with the above quote, versus multiplayer can be a nasty battleground while co-op promotes a more social tolerable atmosphere.  Hopefully Trenched can deliver on its promise.  We're being told that more Trenched news, including a release date, should be ramping up so check back with us for more on the Double Fine title in the coming weeks.