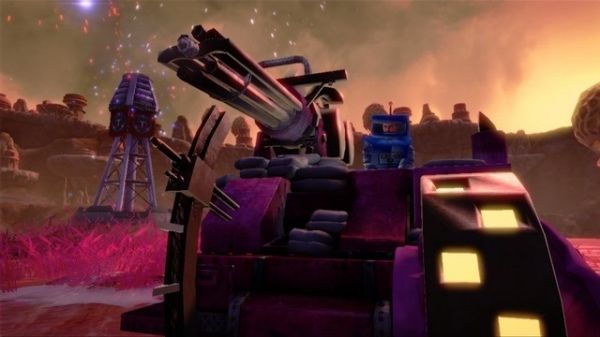 What's cooler than a mobile trench?  That's right, a space mobile trench.  Double Fine's awesome third person mech shooter/tower defense game, Iron Bridgade, (originally Trenched) is heading to the cosmos in an upcoming batch of DLC.  The new content has yet to be priced or dated, but we do have a name and some swanky new pics.  Can we get a little drum role?  No?  Fine.  Be that way.

Then without further ado, the new Trenched Iron Brigade DLC will be called:  "Rise of the Martian Bear."   Wow.  That sounds awesome.  Anytime you can squeeze an ursine extra terrestrial into your game, you know you've got something special.  Judging from the new screens shots, the DLC will also have new paint jobs, new outfits, and new weapons.  A survival mode is also expected to be included.

If you haven't played Iron Brigade yet, I strongly suggest picking it up.  It's great XBLA exclusive,  and it supports four player online co-op.