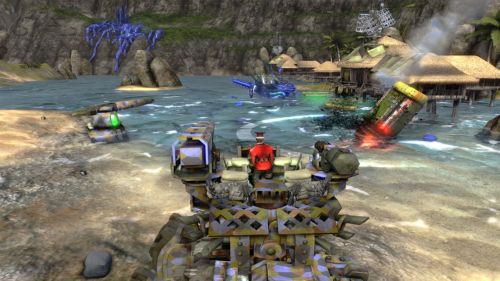 Iron Brigade (formerly known as Trenched) won many Xbox 360 gamers' hearts with its retro sci-fi setting, unique combination of third-person shooting and tower defense, trademark Double Fine charm, and of course: 4-player online co-op. Last week, Double Fine surprised us all by announcing the impending arrival of a PC version. Now Iron Brigade is on Steam at last, complete with Games for Windows Live support for the Achievement lovers out there. Good news: the game is just as great on computer as it was on consoles.

Much like Toy Soldiers before it, the computer version of Iron Brigade automatically includes the 360 game's DLC to make up for its late arrival. 'Rise of the Martian Bear' raises the level cap and adds a new Martian Campaign consisting of 4 defense missions, 2 survival missions, and a Boss mission. With 80 new pieces of loot on top of the main game's ample selection, 'Rise of the Martian Bear' should keep co-op teams busy for quite a while.

Console-to-computer ports are sometimes criticized for lacking basic features and customization options that PC gamers expect from their digital entertainment. Having played Iron Brigade on Steam for a couple of hours, I can say that it's a very good port. I didn't have a chance to test the online co-op, but the implementation seems identical to the Xbox 360 game's. No system linking, sadly.

Graphically, it doesn't push any boundaries and clearly uses the same geometry as its Xbox 360 forebear. But you can push the draw distance way back and toggle essential options like Vsync, FXAA, and HD screen resolutions, so it's no slouch either. Plus Double Fine employs some talented artists, so the aesthetics still lend the game tons of charm. As for the controls, I stuck to the Xbox 360 controller since I'm already familiar with that setup, but mouse and keyboard controls are fully customizable as well.

As our original co-op review indicates, Iron Brigade is best when it's co-op. Thankfully Steam offers a 4-pack for the price of three single copies. Even better, the game is on sale for 20% off for the rest of the week, so even single copies are only $11.99. Whether you're a PC gamer who doesn't have an Xbox or you're just looking for extra GamerScore, give it a try. Someone's got to stop the signal from spreading!