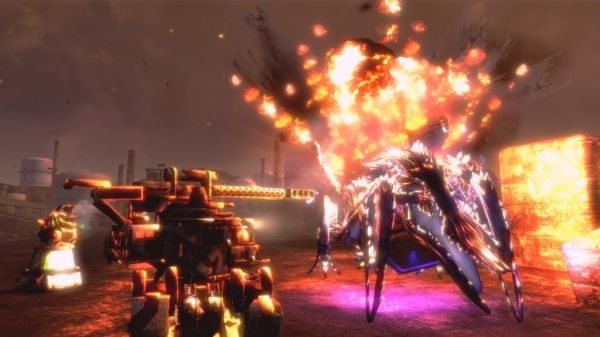 On day two of E3 I got the chance to sit down with Double Fine's Brad Muir.  Muir, for those of you who don't know, is the project lead for Trenched, a rapidly approaching XBLA title.  I'm happy to say that Trenched looks, plays and feels like a Double Fine game.  It's quirky, the art style and animations are captivating, and the whole experience feels well polished.  To get the skinny on the story you can check out the intro cinematic here.  Are you caught up?  Good.  Let's do this.

I met Brad Muir on top of the giant nerve center that was Microsoft's "booth"  (It was more of a building than a booth).  Chris Jurney, Trenched's lead programmer, showed off some of the game's features as Muir and I discussed the title.  Trenched is a tower defense-style game that puts you in the middle of the action.  You pilot your Mobile Trench (it's not a mech!) around the battlefield while placing turrets at strategic locations.  This is not a hands-off game.  You must fight alongside your turrets if you wish to have any success.

The first thing they showed me was the USS McKinley.  This giant aircraft carrier (or "Trench carrier?") acts as a pre-game lobby.  You can run around the deck as your little Trench pilot, picking missions, changing outfits, and most importantly, customizing your ride.  There are four available Trench bays on the McKinley.  When playing co-operatively you'll be able to interact with other pilots using different salutes and gestures. You'll even be able to watch other players customize their Trench in real time.  This is a great way to get together and strategize for the upcoming battle.  You'll want to talk it out because missions scale for multiplayer.  Then you'll select a mission from your cigar-smoking, iron-lung-bound commander.  Yes, you read that right.  He'll even be nice enough to suggest how to outfit your Trench.  That way you can avoid getting your rear handed to you.

There will be plenty of customization options in Trenched.  I asked if they had a "buzz number" for the amount of customization options, since games like Borderlands and Brink have come up with ludicrous numbers for the possible combinations of weapons or customizations.  Jurney and Muir, who are both quite affable, thought it over for about a second.  They mentioned that there will be over 250 equipable items, and a multitude of available equipment slots.  "Billions and billions," Muir said, then added "times four, because there's co-op!"  You can't argue with that math, people!

You can build small scout-like Trenches or hulking war machines.  Each has its own risks and rewards.  Jurney remarked how he was curious to see what kinds of ultimate Trenches the community would come up with.  You'll be able to see them, as well.  The game will support leaderboards, and these will allow you to view the top builds in the world.

To get the best build, you need the best loot.  How will that work when four Mobile Trenches are tearing up the Tubes?  Shared loot, of course.  This game is co-op through and through.  Another cooperative aspect of the game is the Regiment system.  This is a passive system that encourages gamers to play with as many as people as possible.  Every time you play with someone, whether they're in your Friends List or not, they get added to your Regiment.  You will earn rewards through stats gained by your Regiment as a whole.

For example, let's pretend you play Trenched with Johnny Trenchalot on Saturday, and then you go off and do something else on Sunday; let's say, play Brutal Legend or Psychonauts all day long.  When you get back to Trenched, Johnny Trenchalot's constant playing may have unlocked a challenge reward in your own Regiment.  Thanks, Johnny!

The entire campaign is playable in co-op for up to four players online.  Muir expects the average player to make it through the game in 8-10 hours, but he also mentioned rare loot drops, so collectors may have their hands full.  They even hope to support the game with future DLC.  We'll be able to see for ourselves on June 22, when the game comes exclusively to the XBLA for 1200 MSP.  For more information on Trenched, check out our hands-on impressions from PAX East.