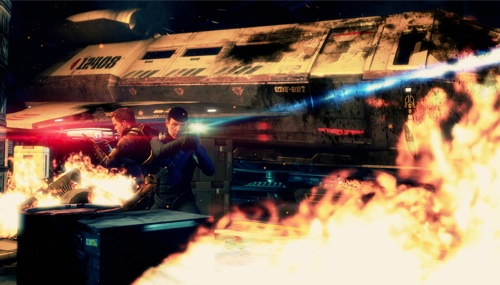 The developers were just as surprised as gamers were when Star Trek was announced to be in development for 360, PS3, and PC.  The title has actually been in development for a year and a half already and is based on the new Star Trek film series created by LOST co-founder JJ Abrahams.  So while gamers were surprised that a decent looking Star Trek game was actually coming, developers were surprised it hadn't leaked in that time period.

What was on display at E3 was only a small vertical slice of the game and we were told it was at least a year away to coincide with the next film, but there's something really impressive and special here - especially for co-op fans.

Star Trek was described to us as using a "buddy  movie structure."  That means plenty of character dialog between Kirk and Spock and plenty of in character comedic moments of things that happen.  This was on display almost immediately as Kirk and Spock blasted through space on a "Life Propulsion Unit" to enter the Enterprise which was being held in some mysterious field.  As both characters attempted to land, Spock stuck his with grace, while Kirk rolled and crashed through some boxes.  "Don't put that in the mission log Spock," says Kirk.  "If its logical it must go in." quips Spock.

The game is designed from the ground up for co-op so each player controls one of the characters in local or online co-op.  Players always have their own view of what's going on - even during cut scenes - which are done in engine.

After landing on the Enterprise the game's in-house engine - called Evolution - was on display.  Excellent textures and lighting, brilliant reflections of everything, and of course "awesome obtrusive lens flares" which are iconic to the Star Trek universe.

It wasn't long before the duo came across a dead red shirt.  Using the tricorder, a famous Star Trek piece of gear, Kirk was able to scan it and determine some sort of parasite killed him.  We were told that finding these red shirts in this section and scanning more and more of them helps later on during the level when you need to use that data.

Shortly after this some alien species started to beam themselves on board.  This action sequence offered a few amazing perspectives and canned animation as the assault begin thats hard to not bring a smile to your face.  You'll get close up views at the likeness of Chris Pine (Kirk) and Zachary Quinto (Spock) in the action.  This cinematic action held even during gameplay as players can execute moves like Spock's mind meld and carry each other off the battlefield.

You an expect all the classic Star Trek weapons, though each one is someone enhanced.  Kirk has a "captain's phaser" which is a souped of version of the Star Trek classic while Spock was using a vulcan based weapon.  All weapons earn XP as you use them unlock new abilities like disintegrate and a shield.  There's even co-op between weapons - in one part Spock deflect the shots back into Kirk's phaser to create a charged super shot which took out a large alien.  The tricorder can also be used to manipulate the ship and environment by hacking doors, overloading system and other optional environmental uses.

The demo started to wrap up when Kirk actually became infected with the same parasite that killed the Red Shirts and Spock had to carry him to the med bay.  During this sequence only Kirk could should while Spock steered.  We were told these were "custom co-op scenes" that aren't required and don't necessarily happen - but they can be triggered and further create a cinematic feel to the game.  It was once the duo reached the infirmary that it became clear of the tricorder's use - the amount of data collected allowed Kirk to heal faster.

Like I said earlier, Star Trek is over a year away yet but the groundwork that's been laid is extremely impressive.  The story of the game isn't necessarily the same as the upcoming movie, so the team was actually able to start production before the movie was even green-lighted.  This is an absolute rarity in the industry.  It takes a lot longer to make a game than it does a movie, so the situation is certainly ideal.  Lets hope Paramount's gamble on developer Digital Extremes pays off - from what we've seen it may already have.