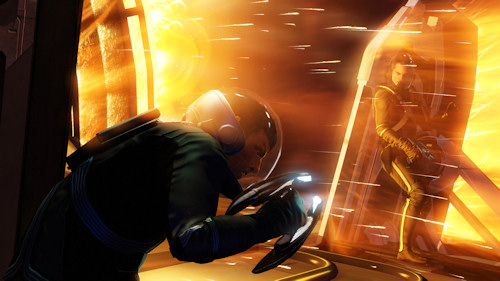 The first thing I thought when I saw the above picture was, "Whoa! Spock jacked a plasma rifle from an Elite Covenant!  Crossover madness! ,"  My second thought: "Judging by the bloom alone, the new Star Trek game will be based on the J.J. Abrams movie."  Well, I was half right.  The new game will continue the story from the J.J. Abrams Star Trek film.  Sadly, there's still no word on a Master Chief appearance.   While we don't know much about it yet, we do know the game is being billed as a co-op experience where players team up as Kirk and Spock "to stop a legendary enemy race bent on conquering the galaxy."  (My guess is something humanoid with minor, yet distinctive changes to otherwise normal homo sapien facial features.)  We also know that the game will be at E3 next week, so we'll be able to pick up all the co-op details for our database there.

Star Trek is currently being developed by Digital Extremes, who are best known for Bioshock 2 and Dark Sector.  You can set your lasers to "beam up" sometime next year.  (I'm just messing with you.)  The smart money says the game will be released around the same time as the Star Trek movie sequel, which is set to hit theaters June 29, 2012.