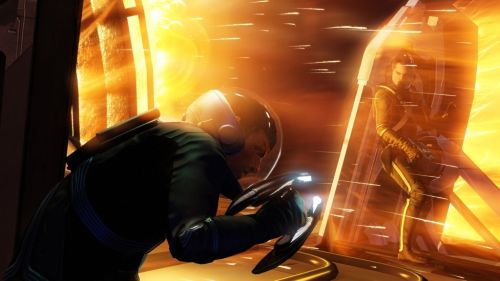 2009's awesome Star Trek reboot film received a decidely un-spectacular and barely related downloadable videogame tie-in: Star Trek D-A-C. Thankfully, when the sequel film rolls around in 2013 it will be accompanied by a much more substantial game at retail, which currently goes by the daring title Star Trek. Namco Bandai has officially picked up the publishing rights and announced it for a first-quarter 2013 release.

The new Star Trek game takes place between the previous film and its way-too-long-in-the-making sequel. Players will take control of Kirk and Spock cooperatively - no word if Kirk gets to smack the smug off of Spock or vice-versa just yet. We don't have specific details of how the co-op mode works either (local, online, etc.), but we'll be sure to check with developer Digital Extremes (The Darkness II) and report back as soon as they're ready to share.