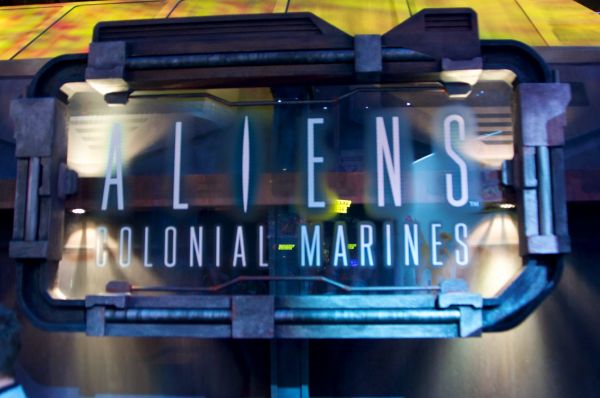 Randy Pitchford immediately quipped that he'd been stealing from Alien(s) for years, so it's a "dream come true" to actually be working on a true Aliens licensed title.  The passion that Randy shows for his titles at Gearbox becomes immediately apparent if you've ever met him or watched him demo a game.  At E3 2011 Randy and a two other Gearbox devs showed us a live demo of Aliens: Colonial Marines, the four player co-op shooter for the 360, PS3, Wii U and PC - and by all accounts - its an Aliens fan's dream come true as well.

The game is a sequel to Aliens, the second movie in the series.  It takes place immediately after the events on LV-426.  But wait, LV-426 was destroyed!  OMG SPOILARZ!  Well it was and it wasn't.  The entire complex is definitely in shambles, and all humans within distance of the atmospheric processor were killed.  But there's still plenty of the colony to explore as players are dropped into the role of the rescue squad of marines that were sent to save the original marines from Aliens.

As the demo began our drop ship was hit with some sort of projectile which caused our group to crash land on the planet surface.  It wasn't long before the familiar ping of the motion trackers lit up as the player regained his consciousness.  Lighting, textures, and particle effects all immediately jumped out at us - we were told the game is using a brand new rendering engine - and it was apparent it was designed to convey the dark and foggy corridors of an Aliens game.  Shadows played tricks with your eyes, sound seemed to come from all directions, and the animation on the aliens were smooth  - almost too smooth - at times looking like swarms of bugs climbing on the walls. There was plenty of character dialog, both serious and light hearted.  The small marine team chatted back and forth as they made their way to the operations center of Hadley's Hope.  It isn't long before pulse rifles are firing and aliens are climbing out of every corner of the sector.  The ping of the motion tracker adds to the tense situation.  At one point an alien jumps on the player causing them to melee and shoot it off.  Despite an explosion of green blood, it seems as though the acid blood isn't quite as deadly to the player in these moments, making them more action oriented and less of a worry some situation.

The team makes their way outside and is greeted by "The Crusher" - a bull headed alien that charges players and tries to smash them.  A tense sequence follows as the marines run for a door and seal it behind them leaving the crusher behind smashing metal like an angered dinosaur.

At this point Randy mentions how the marines have found themselves in a last stand situation.  They are cut off and outnumbered.  They'll need to fortify their position and put up defenses as a whole swarm of aliens are incoming.  It's a perfect time to bring in player help - so another Gearbox dev joins in in true drop-in/drop-out co-op fashion.  The game supports up to four players in co-op online throughout the whole campaign.

The players begin to gather sentry turrets and place them in different positions.  "They like to come through the tunnels...mostly," says Pitchford.  One player didn't even get the turret down in time, the aliens were on them.  Soon they were over run, communicating a fallback order.  Cross fire and cover played an important role in their retreat.

Eventually they entered a hangar bay, complete with power loaders outfitted with weaponry.  They were hoping to make it to a drop ship to escape, but a giant crusher is trying to break through the door in front of them.   As the doors dented, with each smash of his head, more and more aliens poured through the cracks created.  If you've ever broken the surface of an ant nest and watch them pour out of the hole, it looked exactly like that - except the ants will bite your head off and they have acid for blood.

The crusher breaks through, only to reveal its an alien queen,  and comes face to face with the player as the demo fades to black.

That demo was hot as hell.  And I'm not talking a dry heat.

Aliens: Colonial Marines is out Spring 2012.