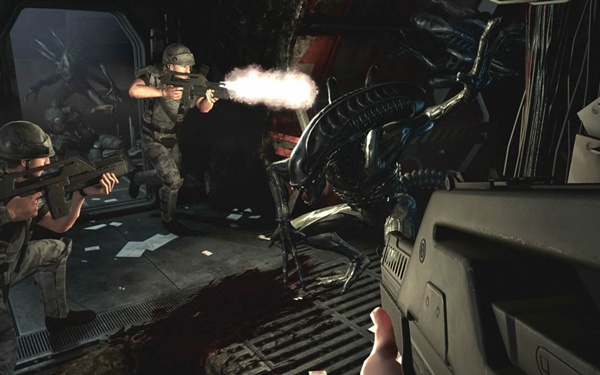 Are you coming or going?

In real life, I would list meeting an H.R. Giger inspired alien as an experience to miss. They have this nasty reputation of ripping people apart, covering you in acid, or impregnating you with a happy snappy alien baby.  It's a good thing that Co-Optimus does not deal in real life, but in co-op gaming.  This means we would love to meet an alien in the guise of the long awaited Aliens: Colonial Marines, the four player co-op shooter that has been in long term gestation by Borderlands maestros Gearbox Software.

Yesterday the news broke that Aliens: Colonial Marines may just become the new Duke Nukem Forever, as sources stated that the game had slipped from 2011 to 2012.  After a few tears and more than one stern talking to, Co-Optimus sought further news.  Gearbox's Randy Pitchford has come out today and stated that there is no truth in the rumor that Aliens: Colonial Marines has been delayed and that the game is still very much pinging away on Gearbox's motion detectors.

Once more the greater co-op gaming community can sleep better at night, but remember; they mostly come at night... mostly.