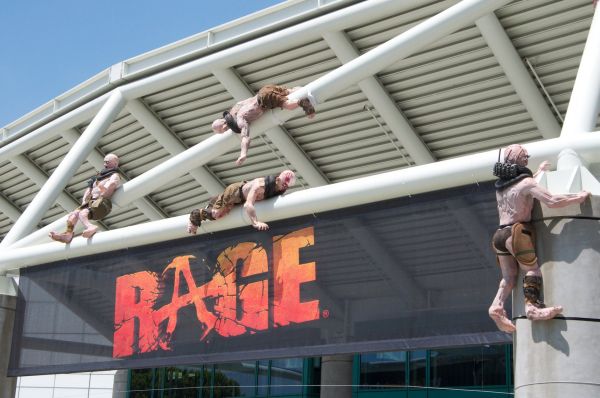 On the third day of E3, I found myself short on appointments and long on games I still wanted to see.  I had been to the Bethesda booth the previous day, but due to time constraints I didn't get a chance to play id Software's new FPS, Rage.  After batting my eyelashes at the front desk I managed to bypass the line and get some hands-on time with the post-apocalyptic title.  I only had a short session with the game, but I was very impressed.

Comparisons to the latest Fallout titles are entirely warranted, if not completely accurate.  Yes, the game is set in a post-apocalyptic world (which is way more exciting that a pre-apocalyptic world).  The game has an actual story where role playing elements are involved.  NPCs hand out missions, and you can upgrade things like weapons and armor.  That being said, this is not just Fallout with vehicles, and the differences are immediately noticeable as soon as you touch the controller.

Rage controls like a modern military shooter.  You can iron sight and pull up you weapon inventory with ease.  If you've seen any of the videos we've been posting, you've no doubt noticed the double diamond inventory select screen.  This allows you to pick weapons effortlessly, you can even change the ammo types with a push of the button and a flick of the analog stick.  What was even more impressive was how good the weapons felt.  Each shot had weight to it, but the recoil was easily handled.

I had a brief experience with the driving elements of the game.  I took a little ATV for a spin, following the highlighted route on my mini-map to my next objective.  It handled like, well, an ATV.  Since Rage is a set in a post-apocalyptic setting you're probably already picturing a lot of brown and gray landscapes, and you wouldn't be wrong.  It is a very brownish, grayish game.  It just so happens to be the best looking brownish/grayish game I've played.  The landscapes are gorgeous, they don't look drab or bland at all.  The whole game just looks and plays incredibly well.

While I was playing the demo I asked one of the nearby Bethesda employees if I could speak with someone about the co-op portions of the game.  He said they would have somebody available for me in a few minutes.  I was alright with waiting.  I was also torn between completing the mission and heading for the horizon.  After a brief internal struggle I carried on with the mission, which had something to do with getting car parts for my new ride.  I didn't get very far, because somebody had indeed arrived to talk to me about Rage's co-op support.

It wasn't just somebody, it was Timothy Willits, Creative Director for id Software and Project Director for Rage.  Cool.  I got straight to the point and asked him to tell me everything he could about "Legends of the Wasteland," Rage's co-op mode.  Here's what I found out.

"Legends of the Wasteland" are missions you can unlock through the single player campaign.  For example, in your travels you'll hear about an incident at the RC Bomb Base.  Some gang or another had to be cleared out for the sake of humaninty and the greater good.  After you encounter this story in the single player game, this mission will be unlockrd for co-op play.  You and a friend (either locally via split screen or online) will play the roll of these other characters in a cooperative match.  We talked briefly about how split screen is becoming a novelty in gaming.  I told him how much I (and the Co-Optimus community) appreciate split screen gaming when we can find it.  Willits replied:

"If you make a co-op game without split-screen, you should get your ass-kicked."

"Can I quote you on that?" I laughed.

Willits thought about it for a second, "Did Hunted have split screen?" he asked, well aware that Hunted and Rage have the same publisher.

"Yep." I should know.  I had just done the Hunted Co-Op Review.

These "Legends of the Wasteland" matches will be something separate from the single player campaign.  Instead of your upgraded gear, you and your compadre will be supplied with mission specific load-outs.  These missions will take you through modified versions of the single player maps.  id Software plans on having nine to ten missions which will be replayable for high scores.  Unfortunately, there won't be any driving portions in the co-op mode.  They are hoping to provide more content with DLC, so we can dare to dream.  They'll be supporting vehicles in the versus mode, so maybe we'll get a chance to ride shotgun with a friend in the future.

While Rage doesn't have a fully featured co-op campaign, it does have silky smooth gameplay and beautiful graphics.  I for one am eager to play the game, in both single player and co-op mode.  It was one of the better gameplay sessions I had at E3.  "Legends of the Wasteland" may simply be a co-operative distraction, but if it plays as well as the single player game, it will be a welcome one.  We can all find out for ourselves when Rage releases on the Xbox 360, PlayStation 3, and PC on October 4.