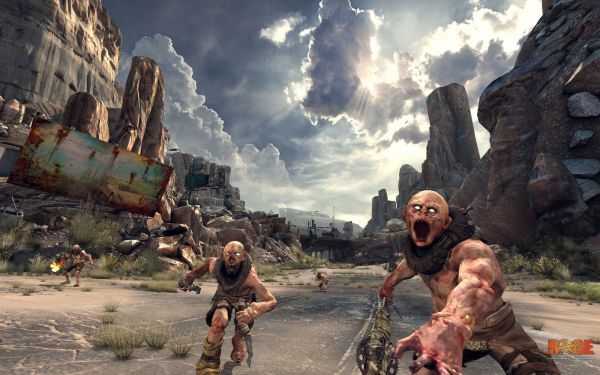 The latest video of gameplay footage for Rage is action-packed, if you don't count the first two minutes and fifteen seconds.  The first couple of minutes introduce characters, setting, plot, etc.  That's nice and all, but you really want to see someone get zapped with an electric crossbow.  Well, you're in luck!  Do you want to see someone take a throwing blade to the head?  It's got that too!  What about deployable turrets?  Everybody likes turrets, right?  There's plenty of close up shotgun blasts and explosive crossbow bolts for the whole family to enjoy!  (As long as your whole family is over 17.)

The shooting sections of Rage are beginning to remind me of Oddworld: Stranger's Wrath.  In that game you had a pretty awesome crossbow which fired an assortment of different ammo.  Granted, the ammunition was made up of cute little fury creatures, but the idea was the same.  Rage is taking a decidedly more adult approach to specialized crossbow ammo, and you can see it on display through out the video.  Of course, at 4:50 one begs the question as to why you even have a gun, if you're fists can do that to a guy's head.  Rage is scheduled for a September 13 release.  The game supports 2 player local and online co-op in its Legends of the Wasteland mode.