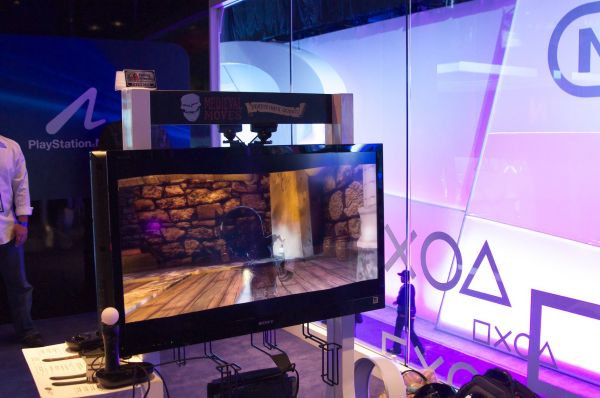 During Sony's E3 2011 press conference they unveiled a new family friendly PS Move title called Medieval Moves: Deadmund's Quest.  Kat immediately turned to me and said how much fun it looked like.  Being developed by the same team that created Sports Champions and utilizing many of the same mechanics, that should come as no surprise.  The gladiator and archery games in Sports Champions were some of our favorite and Deadmund's Quest combines those mechanics with disc golf, or in the game's case, throwing stars.

In the game you take control of a prince named Edmund who gets under a skeleton curse, along with his entire kingdom.  Edmund becomes Deadmund as he works through the kingdom to turn his friends back from the undead.

The main mechanic in the game is the ability to switch between sword play, archery, and throwing stars without any inventory or weapon selection.  Just doing the motion actions with the Move controller causes your character to do the appropriate attack.  Pull an arrow from your invisible quiver and you'll start to shoot arrows, swipe your sword and you'll slash and attack.  Along with your attacks players will need to utilize a grappling hook to navigate the environment or pull down obstacles in your path. The game is actually "on rails" - players don't control movement of the character though there are sections where there are branching paths.  In on section I saw the game give players a more difficult high road or a straight path as a choice.  I was told that sometimes it wouldn't be so obvious which paths were available, in this case the grappling hook point sparkled giving the player a clue.

The developer told us the game would be very family friendly, but also appeal to the hardcore through varying difficulty levels.  Graphically the game looked solid and the motion controls worked really well.  The game's focus was on these controls, so the lack of freedom of player movement wasn't too distracting, only at first.

Medieval Moves: Deadmund's Quest is out this Fall on the PlayStation 3 utilizing the Move controller.