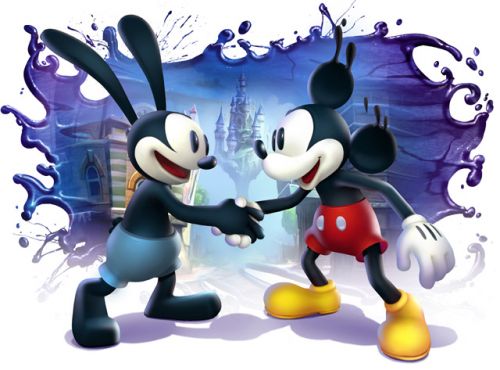 After some hopeful anticipation for an improved Epic Mickey experience, we finally get a closer look at what Epic Mickey: The Power of Two has to offer via an official game trailer.

With multiplayer games these days, many people become frustrated when wanting to work as a team, but can never find any teamwork. In my opinion, any good co-op game needs to actually force dependence on players to work together, much like Portal 2’s co-op mode. From this Epic Mickey 2 trailer, it seems as though Disney Interactive Studios has finally found this crucial element that will most certainly make this game a success. With Mickey being able to open up the world via his magic paint brush/thinner and then, in turn, Oswald helping him maneuver around and manipulate it, a solid co-op experience should be in the future for this game and people should know about it!

Here, grab a sneak peek at Epic Mickey 2 in action and watch the magic for yourself:

Not only will this game provide an improved gaming experience by including a partner, it will also host a classic, Disney-themed musical style instead of avoiding dialogue altogether, which is quite a drastic change from its predecessor. I’m assuming lovers of Disney wanted song over speech? Depending on the choices the player makes, the music/songs will change accordingly, varying gameplay in multiple ways and giving players a new experience each time.

Although Epic Mickey 2 will be available for most consoles this time around (which is a great improvement), it was just confirmed that it will only support Wii and PlayStation Move motion controls, leaving Kinect in the dust. It sort of makes sense in a way, because playing as Mickey and swinging your hand around without an object just looks silly. At least with the Wii and Move you can at least pretend to be wielding a paintbrush or magical remote.

Epic Mickey 2: The Power of Two has yet to announce a specific release date, but around fall 2012 is a good time to look out for it.