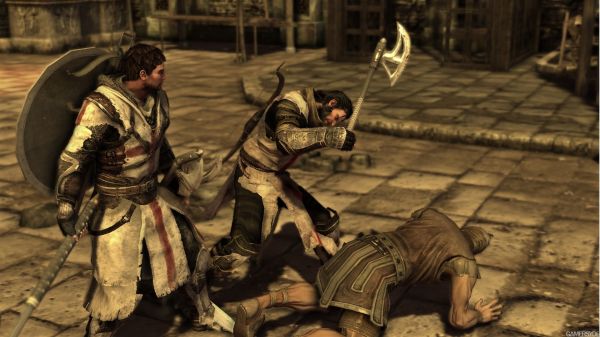 The latest trailer for The Cursed Crusade gives us a little background on the main character, Denz de Bayle.  He's looking for his father, who was last seen following Richard the Lionheart off to war.  We also get to see his buddy Esteban, accent in full effect.  I'm going to guess that the grizzled man with the eye patch, beard, and silver hair is Denz's father.  He seems to be able to kick all sorts of ass.  The game has an obvious Assassin's Creed vibe with its medieval setting.  True, The Cursed Crusade doesn't have free running or an Animus, but it more than makes up for it with brutal combat and hinted trips to hell.  Oh, and it also has co-op.  So it's got that going for it, which is nice.

The Cursed Crusade will hit store shelves on July 26.  It will be available on the Xbox 360, PlayStation 3, and PC.  The game supports 2 player local or online co-op.