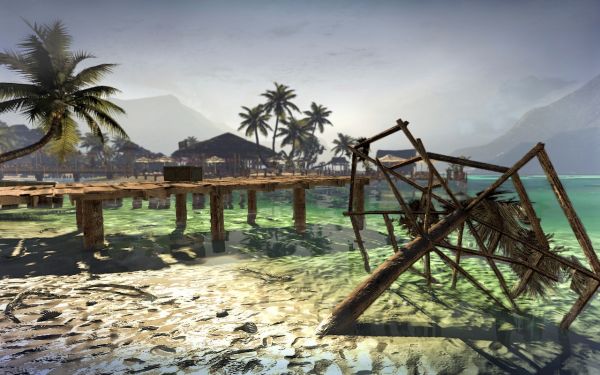 Dead Island has been rated by the ESRB ahead of it's September 6th release on the Xbox 360, PlayStation 3 and PC.  It should come as no surprise the game is rated mature - so you won't be seeing it on our family friendly co-op list anytime soon.

So what does the ESRB description reveal besides the obvious zombie slaying?  Apparently taking a book from some other games - drinking booze actually "increases damage output."  Oh - and you can stomp on zombie heads.

This is a first-person shooter in which players join a group of survivors who must battle a zombie infestation on a tropical island. Players use baseball bats, knives, axes, shotguns, and rifles to kill waves of zombies. Battles are accompanied by screams of pain, realistic gunfire, and slow-motion effects. When zombies are knocked to the ground, players can sometimes stomp on their heads to complete kills. Large blood splatter stains the surrounding environment and players' weapon. Players can also dismember zombies, and various scenes depict bloody torsos, legs, or other mutilated body parts. As the game progresses, alcoholic beverages can be consumed to increase damage output, resulting in screen-blurring effects; in one cutscene, drunken characters are depicted stumbling around a party. Some sequences also reference drug use; one mission requires players to retrieve drugs for a character (e.g., “I haven't shot up since the day before yesterday and I'm getting the chills.”). The game also contains a handful of sexual references in the dialogue (e.g., “One rich bugger I investigated was clearly molesting his fourteen-year-old daughter.”); one scene depicts a bikini-clad woman tied to a bed and surrounded by video cameras. The words “f**k” and sh*t” can be heard in dialogue.