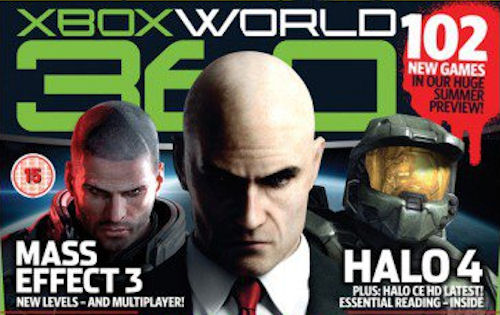 Here we go, here we go, here we go again.  What's this business?  Multiplayer in Mass Effect 3.  It's been rumored many times, it's been shot down many times, but the dang thing just keeps coming back like some succubus from the underworld.  This time it's not a job posting or a he said, she said, kind of scenario.  Instead we have a magazine cover mentioning multiplayer for the game.

The magazine is issue 108 of Xbox World, which has just went to publication and should be in subscribers hands shortly.  Combining this timing with both Gamescom, PAX Prime and the Tokyo Game Show in the next 5 weeks and I'd say we'll have our final, definitive, answer on Commander Shepard and his crew with their co-op possibilities.

According to the Escapist the magazine is simply jumping on the same rumor mill and basically going to talk about the rumors of co-op and multiplayer in the game.

However, according to one commenter, reiterating rumors is all that the magazine does as well. Citing "various sources," the magazine supposedly says that Mass Effect 3 will have a series of three player co-op missions that run parallel to the main story, with each player will take on the role of one of the squad mates. The magazine apparently also covers its back in case the sources prove to be wrong, by saying that developers have been known to dump multiplayer modes if they don't work.

That would be pretty awesome and definitely would fit within the scope of things.  We'll just have to wait and see.  If anyone gets their issue in the mail, please let us know!