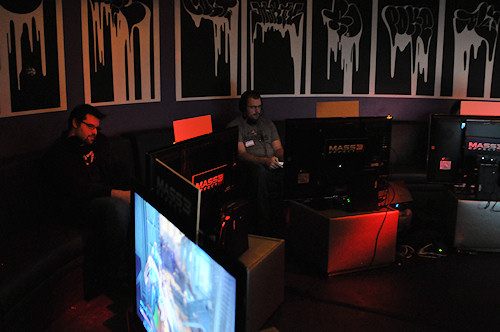 It was the on again, off again, rumor of 2011. Mass Effect 3 will be getting co-op. It won’t be getting co-op. The fact of the matter is - Mass Effect 3 will have a co-op mode, I’ve seen it and I’ve played it, and it’s good.  The entire co-op campaign is part of a larger system called The Galaxy at War.  While the details to this are still completely under wraps it appears that doing certain extra things like playing co-op, participating in a social game, or other similar things can effect what happens during the ending sequences of Mass Effect 3 much like doing the loyalty missions in Mass Effect 2 effected the ending of that game.

The four player online co-op mode drops players into the role of one of six classes, which should all be familiar for those that played the game's single player.  Each persistent character you create is based on the  races from the Mass Effect universe  - Krogans, Humans, Asari, Turians, and three others - and each will earn experience, gain levels, and earn abilities. In between missions you'll use an interface that's not all that different from what you’d see in the single player game to role play your co-op character.  I chose a Drell Vanguard for my character, equipped with a brutal spin kick attack and fast speed.  The previous players were kind enough to level him up to 7 for me, so I had some nice Vanguard abilities under my belt as well.

The missions themselves are said to parallel the game’s story, with players dropped into some pretty gorgeous looking enviornments. The map I played was a section of a city, and while it was actually a confined area, the nature of the action kept things moving forward making it feel much larger than it actually was. Each mission has twleve waves of enemies to get through with each wave containing random enemies and objectives. For example one objective required all the players to get into an area to hack a computer while another might give players a time limit to collect certain objects placed around the map.  Enemies ranged from simpel soldiers all the way to the huge robots that required multiple players to take down. During the missions you’ll earn points for completing these objects as well as killing enemies and completing challenges. The challenges range from performing certain types of kills, to other more objective based goals for players. These points get applied to your experience to upgrade later. I found this gives incentive to perform cooperative actions, like covering a friend or reviving them.

Speaking of reviving, if you get downed you’ll have a certain amount of time before you bleed out. If you bleed out you’ll respawn during the next wave, if all players are down, it’s mission over. Luckily losing mid mission still allows you to bring your XP earned into post mission to upgrade your character.

Our team of four was able to make it to Wave 7 before being over run by the enemy.  We split ourselves up too much, spread things too thin.  The enemy was intelligent, laying down turrets at key choke points making our progress difficult.  We tried to take them out - but alas - it was too much.

Mass Effect's action sequences have slowly moved into the realm of a 3rd person shooter since the first game's more slow and steady approach.  The co-op missions seem to be a natural evolution of this and best of all - they feel good and work.  The use of cover is a big focus, and teamwork is required to move the group forward towards the objective as players provide covering fire for each other.  There's also plenty of satisfying combat moments, one of my favorites is when a one player uses a biotic power to hold enemies while the rest of the team makes quick work of them with their guns.

The Mass Effect franchise was already one of my favorites of this generation.  Mass Effect 3 looks like it won't let me down, giving the game the one feature I always wanted it to have - cooperative play.  The good news for purists is having it is entirely optional and it won't break your single player experience.   Mass Effect 3 is out in March of 2012 on the Xbox 360, PlayStation 3 and PC.