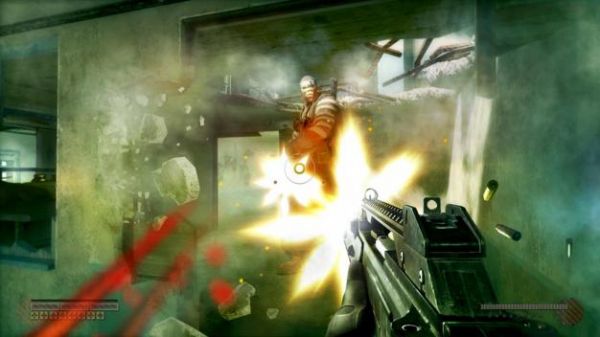 This is part two of the Bodycount: Behind the Bullets developer diary.    Like the previous entry, the video is a mishmash of cuts and smash cuts, aided by some snazzy sound effects.  The way the whole thing is shot and edited is rather silly, but it does have some nice nuggets of information. The developers discuss the differing environments, character design inspiration, and enemy AI.  There are some juicy bits of gameplay footage near the end, be sure to check it out.

IGNUK got their grubby little milts on the co-op mode.  It's an online-only, two player, wave-based survivor affair, but it looks promising.  The destructible environments will play a direct role in your game session.  From IGNUK: "every play-through works out differently as you create different paths and choke-points by blowing out walls and ceilings."  This can work against you, because if you become too captivated with your ballistic redecorating, you'll have nowhere to hide in the later rounds.  To offset this unfortunate circumstance, players will earn temporary power-ups that will make them bulletproof,  give them explosive ammo, or even allow them to call in air support.  IGNUK seemed to really enjoy the co-op.  Follow the above link to see their full article.

Bodycount will release on August 30th for the Xbox 360 and PlayStation 3.  It supports two player online co-op.