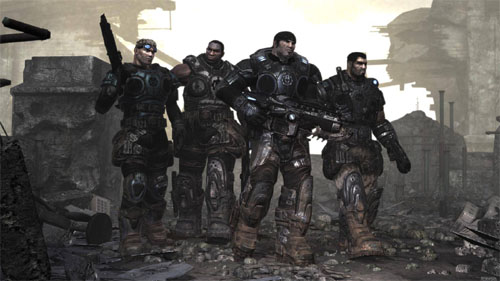 Okay, so maybe Justin Korthof isn’t really a robot, but he is the Community Manager for Robot Entertainment (currently promoting upcoming Orcs Must Die!), and I mean, c’mon, Gears - Robot? How could I not go there? All mechanical devices aside, Justin and I had a nice laid-back co-op session as we played the first few campaign missions of the first Gears of War. With Gears 3 fast approaching, he had the urge to go back and replay the first two games. As a father and the community manager of a game very close to launch, he hasn’t had much gaming time, so our TWIC All-Stars appointment fit the bill very neatly. The man managing the community at Robot Entertainment, Justin Korthof

I’d warned Justin well in advance that I still consider myself a console newbie. I feel fairly confident in my performance in RPGs and platformers, but when it comes to aiming with an analog stick, my skills are woefully lacking (don’t people know that the mouse is where it’s at?!). Given all that, I was still a little anxious that I would embarrass myself. Much to my relief, Justin didn’t seem to mind that it took me probably twice as many bullets to down an enemy (or dare I hope he didn’t even notice?). We got a good laugh after we spent a good 5 minutes getting stuck in the training area. Neither of us remembered the game well enough to recall that the enemies are supposed to cut their way through the door at the end, so we instead searched fruitlessly for a way to open the doors until we decided to reload the checkpoint. The second time through the enemies cut down the door as scripted. All the time spent searching when it was just a bug. Durr.

Aside from that troublesome bug, however, our gameplay session went very smoothly. We chatted about which game genres we preferred (he enjoys shooters with a good story), the cities we’ve lived in (we’ve both lived in Seattle fairly recently), and which comic book heroes were the best (he’s more of a Superman guy). Together we marveled over Marcus’ vast vocabulary (“Nice.” “Sweet!”) and how Dom was such an upbeat guy compared to Mr. Doom-and-Gloom in Gears 2. We ran. We gunned. We revived each other. After about an hour and a half it was getting pretty late, so we decided to call it quits. I had a great time playing with Justin and I hope he had a decent time too.