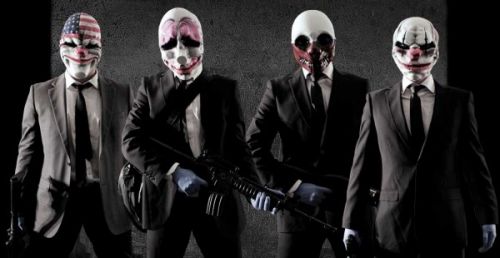 Once a thief, always a thief, right? Well, don't forget to get your clown mask dry cleaned, because Payday: The Heist will be given a sequel in the not so far off future!

Playing as a petty criminal (and by petty, I mean totally stacked and badass) has never been as fun as when Payday first arrived back in 2011. Now, as stated on Eurogamer, Swedish developer, Overkill Software, is currently hard at work on “enhancing” the first game with new DLC’s, and is also busting butt to create a sequel to the bank-robbing blockbuster and give us some more team-based, heist thriller action.

Starbreeze, the developer of FPS title, Syndicate, announced that it has agreed to buy Overkill Software, pending immediate approval from its shareholders, which seems to be almost certain to happen. Starbreeze boss, Mikael Nermark, stated that he intends to allow Overkill to continue with their Payday sequel and DLC’s, which Starbreeze shall include in their library of published titles:

They will still continue to grow the first Payday, to enhance that experience, and move to the sequel. They're doing great stuff, and I'm not going to change that in any way. We're going to give them the creative freedom to do what they've done so well. We're broadening our portfolio. With this acquisition we will also be stronger in the eyes of a publisher. It's one part of what we want to do.

Starbreeze is also working on a few other titles in the works, namely P13 and Cold Mercury, and a secret title that has yet to be revealed, all of which will launch for the PC, PlayStation 3, and Xbox 360.

The first game was packed with a ton of co-op action and teamwork, making the game perfect for online. Nothing more was stated about the sequel as of yet, but we’ll be sure to keep our eyes peeled for more info at E3 this June. Until then, be sure to download Payday: The Heist from the PlayStation Store if you haven’t already; it’s worth every penny.